The Writing on Kabul's Walls 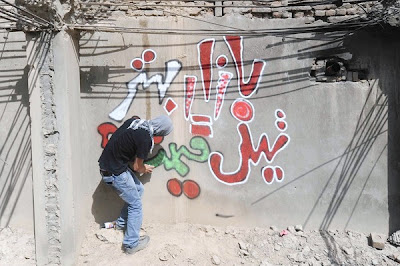 Kabul graffiti artist Dy, aka Dysprosium, tags a wall in the Afghan capital. "You need to speak the truth and accept risks," says the gangly twenty-something year old. (David Gill / For The Times / August 1, 2011)


A group of nascent graffiti artists work in the shadows as they take spray can to wall to make political statements; corrupt politicians, drug traffickers and warlords are a favorite target.


Mark Magnier reporting from Kabul for the LA Times.

Dy, a.k.a. "Dysprosium," a name taken from a rare chemical element and meant to suggest his elusive nature, glides across the underbelly of the edgy city. It's after midnight in Kabul, approaching a favored hour for would-be suicide bombers to enter the city while security forces sleep, so they can strike during the morning rush.

Dy, however, is armed only with cans of spray paint, and his intentions are peaceful: to alter the drab contours of this embattled city.

Identifying a wall, Dy pulls the paint cans out of his bag and works quickly, writing slogans and crafting images that rail against corruption, repression and the malign influence of drug money.