Troops and Contractors in Afghanistan | March 2012 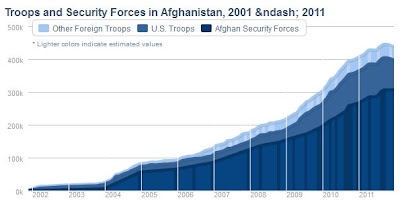 "What I understand is what it's like to be in a war zone and I understand the behavior in a war zone. And I would say that, first of all, that war is really an institution made up of criminal behavior. When we as civilians want to solve our problems, we're not allowed to murder people and burn their houses down. I don't see why war is an acceptable means of conflict resolution. And furthermore, the majority of people that die are innocent civilians." - Scott Camil, US Vietnam Veteran

According to the Brooking’s Afghanistan Index at the end of March there were 89,000 US troops in Afghanistan. The Department of Defense lists an addition 143,839 contractors.