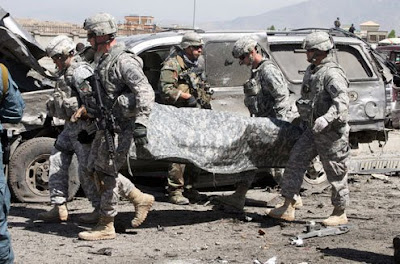 One month after a deadly car bombing in Kabul the UN Office for the Coordination of Humanitarian Affairs offers some insight into the levels of violence in the country by interviewing one of the wounded. It is not often that we have an opportunity to look behind the headline.


KABUL, 16 June 2010 (IRIN) - Only seconds after a convoy of armoured military vehicles passed Fawad Tokhi, 35, at about 8.20am in the south of Kabul city on 18 May, he was wounded in a suicide attack.

“I was bleeding. The only thing I could do was to call my brother and tell him that I was wounded,” Tokhi told IRIN at his home in Kabul. He was seriously hit in the chest and abdomen.

Officials said the blast killed six foreign soldiers and at least 12 civilians; another 47 civilians were injured.

“I don’t understand what ISAF [International Security Assistance Force] achieves on busy streets in Kabul except creating traffic congestions and causing risks to people,” said Ahmad Wali, 19, who was injured in the same attack.

To illustrate what a magnet for violence that foreign forces have become in Afghanistan consider this.

“Foreign forces came to our village and said they want to asphalt the road but we said no,” said Shir Ahmad, a resident of Dara-e-Pachaye in Kabul’s Paghman District. “We know the road is good but we also know that an asphalted road brings ISAF patrols and with them comes suicide and roadside attacks.”

Two weeks after the attack, the New York Times reported that 30 Afghan’s had been shot to death and 80 wounded from passing convoys and at military checkpoints in the last six months.

“We have shot an amazing number of people, but to my knowledge, none has ever proven to be a threat,” said Gen. Stanley A. McChrystal, who became the senior American and NATO commander in Afghanistan last year. His comments came during a recent videoconference to answer questions from troops in the field about civilian casualties.
Posted by Peter at 1:15 PM