What to Make of the UN Report on Civilian Casualties? 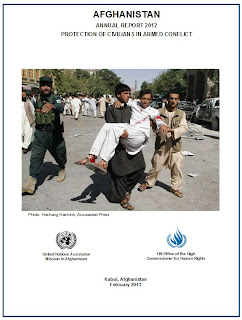 Since 2007, the United Nations Assistance Mission in Afghanistan has sought to document the number of civilian casualties in the war.

The annual report for 2012 was released yesterday in Kabul and for the first time ever documents a decline in the total number of civilian deaths (12%).

The welcome news was conditioned, as UN officials and human rights groups expressed concern that it may not be sustainable, worried that the root causes of the violence were not being addressed. In fact, the report notes that civilian casualties in the second half of 2012 rose by 13% from the previous year.

The real challenge of the report is that it raises more questions than it answers. Presenting readers with the dilemma of how best to interpret this very thorough effort. For example, is this a useful way to quantify violence?

What is not covered by the report is the number of young men being killed – as police, army, foreign forces, Taliban or militia member. With the total impact of the violence left blank it is hard to know if Afghanistan is emerging from war or tragically moving into a new more hidden phase of the war.

Some disturbing trends for 2012

Here are some additional links to analysts with something to say.

Kate Clark with the Afghanistan Analyst Network has this summary.


“UNAMA said the fall in civilian deaths happened during the first five months of 2012 and was due to, ‘unseasonably harsh winter which impeded insurgent movements and [the] effects of earlier military operations against Anti-Government Elements.’ From July onwards, however, it found a 13 per cent increase in civilian casualties compared with the same period in 2011 and noted a over-proportional 17 per cent increase in civilian casualties from IEDs placed in public and civilian locations and intensified conflict in some parts of the country. So, the falling pattern of casualties is not yet assured.”

“a new category of hostile actor, what it calls ‘armed groups’ - militias which are neither insurgents or within the formal, legal structure of the state (and often former ‘illegal armed groups’, to be dealt with by the DIAG program, but never disbanded). UNAMA has documented such groups in 40 districts in the north and north-east alone and finds they are particularly rife in Faryab and Kunduz;”

Shashank Bengali of the Los Angeles Times looks at the targeted killings.


“But the report said targeted killings -- attacks against government employees, tribal and religious leaders and Afghans involved in peace efforts -- resulted in more than twice as many deaths and injuries in 2012, in part because Taliban-led insurgents increased their use of homemade bombs that spread damage over a wider area.
U.N. officials said they were particularly disturbed by a seven-fold increase in casualties among government workers, including the murders of the two top officials in the women's affairs department in Laghman province, east of Kabul.”

Alissa J. Rubin of the NYT’s looks at structural changes and the removal of US heavy weapons.


“A factor that United Nations researchers found accounted for the drop in casualties was a reduction in ground engagements, which in some areas may be because of a declining number of Western forces. In other areas, there was an increase in engagements between the Taliban or other insurgents and the Afghan National Security Forces, but because the Afghan forces were less likely to have heavy weapons, the number of civilians killed appears to have dropped.”

Raffaela Wakeman writing at Lawfare looks at the improbable assertion that only .37% of US drone strikes resulted in civilian casualties.


"UNAMA counted five incidents out of 1,336 total “weapons releases from remote piloted aircraft” that resulted in a sum total of 16 civilian deaths and 3 injuries. That is to say that a whopping 0.37 percent of air strikes caused civilian casualties. The raw number is actually an increase. UNAMA only documented one such incident in 2011, although it’s unclear from the 2011 report how many civilian casualties resulted from the singular UAV strike. The report explains that “most” of these UAV civilian casualties were caused by weapons “aimed directly at insurgents,” but asterisks that by saying that other information indicates some of the casualties might have occurred as a result of targeting errors."