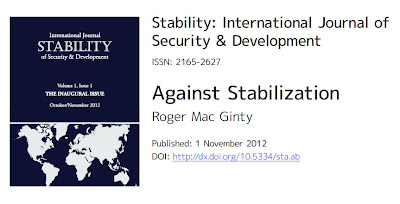 Roger Mac Ginty is Professor of Peace and Conflict Studies at the Humanitarian and Conflict Response Institute (HCRI) and the Department of Politics. His main research interests are in international peace-support interventions and local reactions to these interventions.
"This is a polemic against the concept and practice of stabilization as practiced by leading states from the global north in peace support interventions. It is not an argument against stability. Instead, it depicts stabilization as an essentially conservative doctrine that runs counter to its stated aims of enhancing local participation and legitimacy. It is an agenda of control that privileges notions of assimilation with international (western) standards and mainstreams the military into peace-support operations. As a result, the value of peace is undercut."
How popular is the term?

A google search for ‘stabilization in Afghanistan’ brought up 2,460,000 results in .28 seconds.  It is a concrete example of how the term has come to define modern wars and intervention.
*****
His key points distilled.
Stabilization – as a concept and practice – lowers the horizons of peace and peace interventions. It moves us away from the realm of emancipation towards the realm of control.
Mainstreaming of stabilization has resulted in a hollowing out of peace in international approaches to intervention.
The concept of stabilization further normalizes the role of the military and aligned security agencies into peacebuilding. As seen by both the US and UK, stabilization is about harnessing civilian and military know-how, and institutionalizing the working relationships between the two sectors.
Read the article here.
Posted by Peter at 12:18 PM