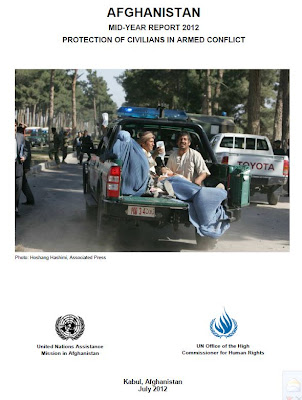 Mid-Year reports on civilian deaths in Afghanistan have just been released by the United Nations Assistance Mission in Afghanistan and the Afghanistan NGO Safety Network. Although the total number of civilian casualties in the first half of 2012 was 15% lower than the number in the same period of 2011, both studies warn that the underlying structure of the conflict has not changed and are deeply concerned about the continuing violence.

“The United Nations welcomes the reduction in civilian casualties, but we must remember that Afghan children, women and men continue to be killed and injured at alarmingly high levels. The 3,099 civilian casualties documented in this report were ordinary Afghans struggling to go about their daily lives in the midst of an armed conflict.” - Nicholas Haysom, Deputy UN Special Representative of the Secretary-General in Afghanistan

“…the conflict has seen no confidence building measures which would demonstrate a genuine interest to engage in peace resolution on any side. This is particularly disappointing since it is a political dialogue, not tactical military achievements, which will ultimately determine the chances for the civilian population to see an end to extant violence.”
- Afghanistan NGO Safety Office Second Quarter Data Report


“1) Targeted killings are up. Way up. During the first half of this year, 255 civilians died in targeted killings by anti-government forces, compared to 190 in the first half of 2011. According to UNAMA, “Government employees, off duty police officers and civilian police, tribal elders, civilians accused of spying for Pro-Government Forces and government officials remained the primary focus of these anti-government attacks.” This is a worrisome trend to watch as the drawdown of foreign forces continues.

2) Internal displacement is climbing. According to the UNHCR, 17,079 Afghans were newly displaced by violence between January 1 and June 30 of this year, bringing the total number of IDPs in the country to 114,900.

3) Schools, students, and teachers are increasingly under fire. In the first six months of 2012, UNAMA verified 34 cases of Anti-Government Elements launching attacks against education facilities, staff and students, and other incidents impacting education. These included the burning of schools, targeted killings of teachers and staff, armed attacks on education facilities, occupation of schools and intimidation and closure of schools, particularly girls’ schools. This represents a substantial increase in such incidents compared to the same period last year when UNAMA documented 10 similar instances. Six of these 34 cases confirmed by UNAMA involved targeted killings of teachers, school guards or department of education officials by Anti-Government Elements.

As part of its consultations with 99 conflict-affected communities across Afghanistan, UNAMA found that the Taliban’s influence on the education system in those areas is increasing. This has had consequences for children’s access to education, particularly for girls. Anti-Government Elements have asserted their influence in many communities not only to incorporate changes to school curricula based on their ideological beliefs, but also as a basis to negotiate politically with local communities.

4) Improvised Explosive Devices (IEDs)still kill the greatest number of civilians. Attacks involving IEDs accounted for 53 percent of civilian casualties documented by UNAMA in the first half of 2012, and victim-activated IEDs, the kind that detonate indiscriminately when touched or driven over, accounted for one third of all civilian injuries and deaths. In its mid-year report, UNAMA noted that because such devices do not distinguish between combatants and civilians, “many IED incidents that resulted in civilian casualties could amount to war crimes.”

5) Weather, not tactical changes, probably explains the relatively lower number of civilian casualties in the first half of this year. Experts believe that the decline in civilian deaths and injuries can largely be credited to this year’s unusually harsh winter, which cut into the ability of the Taliban and other groups to carry out attacks against civilian targets in the early spring. With the cold weather months now a distant memory, civilian casualties are again rising.”

What's missing from the reports is documentation on casualties for Afghan Army and Police. The Voice of America cites statistics dating back to 2007 to show that more than 6,500 Afghan security force members have been killed.

In July Afghanistan's former intelligence chief Amrullah Saleh said there has been no improvement in the security situation in recent months.