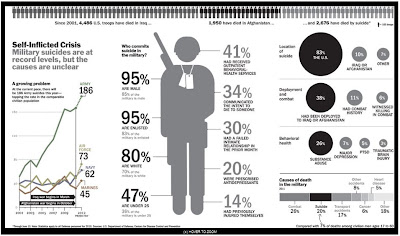 Last month witnessed a record number of suicides in the U.S. military. In fact, more soldiers took their own lives then died on the battlefield. The interactive graphic above was published in June by Time.

Rebecca Burns writing for In These Times has a powerful profile entitled ‘Suicide is Anything but Painless.’ She features the field organizer Maggie Martin from Iraq Veterans Against War.

Yesterday the New York Times ran graphics and pictures to acknowledge that the death toll for US forces in and around Afghanistan had passed 2,000.

The Invisible Wounds of War: Coming Home from Iraq and Afghanistan


“The month of July set a record high for the number of suicides in the U.S. military. An Army report reveals a total of 38 troops committed suicide last month, including 26 active-duty soldiers and 12 Army National Guard or reserve members — more soldiers than were killed on the battlefield. The reasons for the increase in suicides are not fully understood. Among explanations, studies point to combat exposure, post-traumatic stress, misuse of prescription medications and personal financial problems.

Army data suggest soldiers with multiple combat tours are at greater risk of committing suicide. Defense Secretary Leon Panetta addressed the issue in June at the annual conference on suicide prevention in the military, saying, "Despite the increased efforts, the increased attention, the trends continue to move in a troubling and tragic direction." We speak with Marguerite Guzmán Bouvard, whose new book is called, "The Invisible Wounds of War: Coming Home from Iraq and Afghanistan."”