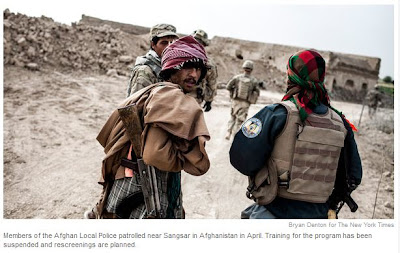 The Upper House of Parliament today demanded an investigation into the Afghan Local Police (ALP) after the killing of 11 civilians in Kunduz province on Sunday. Armed and trained by US Special Forces and initiated by General Petraeus the ALP is under the control of the Interior Ministry.

Most Afghans understand the program to be the creation of unaccountable militia forces. Bringing back memories of the terrible civil war violence between foreign armed militia armies.

Last September Human Rights Watch said the initiative was "a high-risk strategy to achieve short-term goals in which local groups are again being armed without adequate oversight or accountability."

Emal Habib, writing for the Afghanistan Analyst Network, investigates governmental and international support for the militia. Noting that the Afghan Local Police (or Arbaki) are presented as “armed, popular local uprisings” that have “expelled the Taliban” from several districts in eastern Afghanistan.

On Sunday US forces announced they were suspending the training of 1,000 recruits of the 15,000 person force due to attacks against foreign forces (LA Times, The Hill, NYT )