Live From Kabul | An Afghan Conversation


Join us for a live video conference with Afghan civil society activists on Thursday, Dec. 6, 2012 at 10 a.m. Eastern. With upcoming milestones such as the removal of NATO/U.S. forces and presidential elections to replace Hamid Karzai after 10 years of rule, this is a critical time to discuss the role U.S. civil society can play.

To participate during the event submit your questions to Questions@afsc.org

If you can't join us on-line, here are details for a listen-only phone conference. 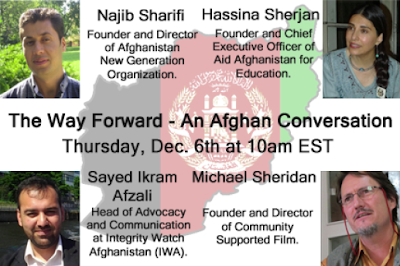 To really link U.S. and Afghan civil society groups, we need to know and understand each other better. Send us your questions now. They will be shared with all the speakers before the call. You will also be able to ask questions during the call.


Bios of Participants in Kabul

Sayed Ikram Afzali is the co-founder and president of Youth in Action Association – a non-profit youth-led organization dedicated to enhancing peace and sustainable development in Afghanistan. He has been a youth advocate and development professional for the past decade focusing on peace building and anti-corruption issues. With an aim to help rebuild Afghanistan, Afzali returned to Afghanistan after 20 years of refugee life in Pakistan. Affected by years of conflict in the region, he has been a strong believer in bringing about peace through youth using non-violent approaches – such as using sport as a vehicle for peacebuilding. Sayed has also worked with the United Nations and other national organizations for more than seven years in the area of democratic governance with a focus on civil society and anti-corruption. He is currently Head of Advocacy and Communication at Integrity Watch Afghanistan (IWA)

Integrity Watch Afghanistan (IWA) was established as an independent civil society organization in 2006. IWA’s mission is to put corruption under the spotlight by increasing transparency, integrity, and accountability in Afghanistan through the provision of policy-oriented research, the development of training tools, and through facilitation of policy dialogue.

Hassina Serjan is the Founder and Chief Executive Officer of Aid Afghanistan for Education and the owner and Chief Executive Officer of Boumi Company – an internationally recognized women-owned home accessory business. Hassina co-authored the book Toughing It Out in Afghanistan, and has published numerous op-eds in the New York Times, The Washington Post, The Guardian, USA Today, and more. She received a Master’s of Public Administration from Harvard Kennedy School and has an Honorary Doctorate of Law degree from Queen’s University in Canada.

Aid Afghanistan for Education (AAE) is dedicated to empowering Afghans and rehabilitating the education system in Afghanistan, and provides primary and secondary education for marginalized Afghans. Boumi – Farsi for “indigenous” – manufactures Afghan-made products with raw materials produced in Afghanistan, supplying high-end products to the global marketplace.

Najib Sharifi is the Founder and Director of Afghanistan New Generation Organization. Najib is a medical doctor by training, but over the past ten years he has worked for some of the leading news organizations around the world including the New York Times, BBC, CNN, National Public Radio and the Washington Post. He has researched for the Afghanistan Research and Evaluation Unit and Human Rights Watch. In addition, he served as senior political officer for the Office of the Special Representative of the EU for Afghanistan. In 2009, Najib won a Humphrey/Fulbright scholarship and studied public policy and leadership at the University of Maryland, College Park. Najib’s analysis and opinion pieces have appeared on various Western media outlets including South Asia Global Affairs and the foreign policy magazine. He is a frequent commentator of issues of domestic Afghan politics and foreign policy of the Western countries towards Afghanistan on Afghan and international media.

Afghanistan New Generation Organization is a non-profit youth empowerment organization with aims to empower the youth to become competent community advocates by providing training in such areas as public speaking, media literacy, and use of information technology among others.

Michael Sheridan, Director and Founder of Community Supported Film, is a filmmaker, educator and activist. For nearly 20 years Michael has engaged the public in stories from Asia, Africa and the Americas about people in poor and developing communities challenging the status quo and struggling to improve their lives. Michael co-founded Oxfam America’s documentary production unit and has sought to break new ground in the effective use of media to educate and change policy. He has taught documentary filmmaking for 15 years at the community and university level, extensively in the United States and Afghanistan, and as a Fulbright Scholar in Indonesia.

Community Supported Film strengthens the documentary filmmaking capacity in crisis and post-crisis communities where the dissemination of objective and accurate information is essential. Local women and men are trained to produce stories on their community’s socioeconomic issues, and the resulting films are screened in audience engagement campaigns. Michael founded Community Supported Film in 2010 with a pilot program in Afghanistan that resulted in the production of 10 Afghan-made films, The Fruit or Our Labor. Michael also runs his filmmaking company SheridanWorks.

Peter Lems is the Program Director of education and advocacy for Iraq and Afghanistan at the American Friends Service Committee. He is also the co-coordinator of the Wage Peace campaign, a program initiative that seeks to wage peace with the same determination and energy that nations wage war.

The American Friends Service Committee carries out service, development, social justice, and peace programs throughout the world. Founded by Quakers in 1917 to provide conscientious objectors with an opportunity to aid civilian war victims, AFSC’s work attracts the support and partnership of people of many races, religions, and cultures.
Posted by Peter at 1:08 PM