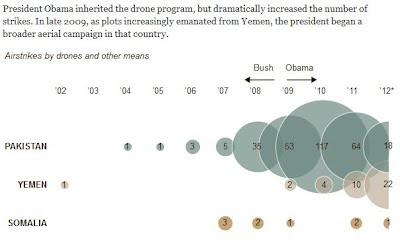 With remarkable access to participants, reporters Jo Becker and Scott Shane document the increasing use of drone warfare and targeted killings. This is the third in a series of article about President Obama called the shadow war.

It's a revealing look into the bureaucracy that sustains the drone policy and the decision by President Obama to sign off on targeted strikes outside of Pakistan where the CIA is in charge.


“In interviews with The New York Times, three dozen of his current and former advisers described Mr. Obama’s evolution since taking on the role, without precedent in presidential history, of personally overseeing the shadow war with Al Qaeda.

They describe a paradoxical leader who shunned the legislative deal-making required to close the detention facility at Guantánamo Bay in Cuba, but approves lethal action without hand-wringing. While he was adamant about narrowing the fight and improving relations with the Muslim world, he has followed the metastasizing enemy into new and dangerous lands. When he applies his lawyering skills to counterterrorism, it is usually to enable, not constrain, his ferocious campaign against Al Qaeda — even when it comes to killing an American cleric in Yemen, a decision that Mr. Obama told colleagues was “an easy one.”"


“It is the strangest of bureaucratic rituals: Every week or so, more than 100 members of the government’s sprawling national security apparatus gather, by secure video teleconference, to pore over terrorist suspects’ biographies and recommend to the president who should be the next to die.

This secret “nominations” process is an invention of the Obama administration, a grim debating society that vets the PowerPoint slides bearing the names, aliases and life stories of suspected members of Al Qaeda’s branch in Yemen or its allies in Somalia’s Shabab militia.”

New guidelines for strikes in Yemen.


“Today, the Defense Department can target suspects in Yemen whose names they do not know. Officials say the criteria are tighter than those for signature strikes, requiring evidence of a threat to the United States, and they have even given them a new name — TADS, for Terrorist Attack Disruption Strikes. But the details are a closely guarded secret — part of a pattern for a president who came into office promising transparency.”

Article link here.
Posted by Peter at 7:31 AM