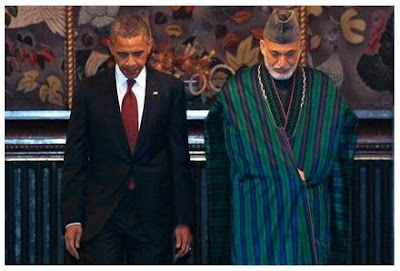 President Barack Obama and President Hamid Karzai emerge from their meeting before signing a strategic partnership agreement at the presidential palace in Kabul, Afghanistan, Wednesday, May 2, 2012. (AP Photo/Charles Dharapak)

Linked below are some of the documents released by the White House.

The Agreement covers a ten-year period with a comprehensive commitment to aid, economy, education, justice and war. However, because it is a framework, there is a lack of detail on all these matters.

One thing is clear.


“4) This is not a status of forces agreement - or ‘Bilateral Security Agreement’ as it is termed in the Strategic Partnership Agreement. That should come, the Agreement says, in a year’s time. This is by far the more important issue, as the US needs its forces to continue to enjoy immunity from the Afghan justice system for any crimes they commit on Afghan soil. Sorting out this issue has been made more urgent after many Afghans, including parliamentarians, demanded that those responsible for the Panjway killing spree and the Quran burning at Bagram had to be tried in Afghan courts. Whether or not a status of forces agreement is signed will ultimately decide whether US forces can stay or, as in Iraq, go.

5) However, as it stands, Afghanistan agrees to provide US forces with continued access to and use of Afghan facilities to the end of 2014 and beyond (as it may be agreed in the ‘Bilateral Security Agreement’) for the purposes of, ‘combating al-Qaeda and its affiliates, training the ANSF and other mutually determined missions to advance shared security interests.’ Or as Obama put it in his speech: there will be ‘two narrow security missions beyond 2014: counter-terrorism and continued training.’ The aim, he says, is to destroy al-Qaida, not to build a country in America’s image. It seems then that the mission is not about nation building. Yet this is completely at odds with most of the Strategic Partnership Agreement which does very much focus on nation building and with an agenda which looks, despite its repeated commitments to internationally accepted norms, not much as that of the Afghan government in practice.”

President’s Address to the Nation from Afghanistan

Newsletter: What will lead to a just and lasting peace in Afghanistan?

Our strategy is to challenge the media message with a public letter campaign, please help us. Click on the link to be directed to the action center.

Letter to the Editor


“After the President's speech Tuesday night, some might be under the impression that the war in Afghanistan is ending. On the contrary.

The plan that Mr. Obama announced just relies upon different military solutions, rather than peaceful alternatives for the Afghan people.

Under this plan Afghanistan will become a major non-NATO ally, subjecting the people of Afghanistan to yet another military alliance and continuing the last three decades of war and instability. The peace building necessary for a sovereign and stable Afghanistan cannot be carried out by the generals meeting later this month in Chicago for the NATO Summit.

Instead, we need to support a regional solution that doesn’t rely on force. Afghans don't want more wars and bigger armies. They want a settlement that heals a nation, instead of arming it. And so do many Americans.”