The Other Guantanamo: Afghanistan begins Internment 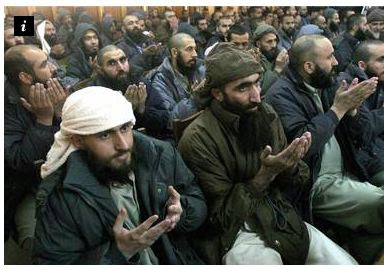 In March, the United States and Afghanistan completed negotiations to begin turning over control of Afghan prisoners to the government of Afghanistan. On Monday, Afghan institutions could start ruling on the internment of its own citizens. The image above is from a Taliban prisoner release in 2010.

The fact that the government appears to be embracing the United States policy of detaining people without trial is a cruel legacy.


“The use of the US system of detention without trial by the Afghan government is probably the most important consequence of the handover of Bagram. Yet it has been introduced with virtually no discussion, whether in parliament or the media. The Afghan government has appeared reluctant to discuss the issue: even as the new Afghan institutions were being established to detain Afghans without trial at Bagram, President Karzai’s spokesman told AAN they were against the practice. Kate Clark details what is now happening at Bagram, reveals unpublished documentation and questions whether the Afghan state has actually gained sovereignty over its detained citizens and whether the US has really relinquished any control.”

“The US was concerned about the possible release of some of those it deems the most dangerous people in custody, particularly as the 3000 odd people currently held by the US without trial might be considered illegally incarcerated under Afghan law. Hence the Afghan and US negotiators took recourse to the Laws of Armed Conflict. Both the Bagram MoU and the MoU on Special Operations, which was signed a month later (text and analysis are here), cite the 1977 Second Additional Protocol to the Geneva Conventions (APII) as the legal basis for detention without trial. APII acknowledges that when a state is fighting a war, it may deprive its citizens of ‘their liberty for reasons related to the armed conflict.’”

“If the Board recommends release, the case file is passed back to the Committee. However, the decision to release any detainee is made by the Bagram Transfer Commission, which is comprised of five ministers, under the chairmanship of the minister of defence. But even they cannot act independently. They must consult the US before releasing anyone, including those being sent for trial. The Bagram MoU says that if the US believes a particular individual remains a security threat, ‘Afghanistan is to consider favourably such assessment.’ This may be diplomatic language for a veto.”