What the Taliban Want 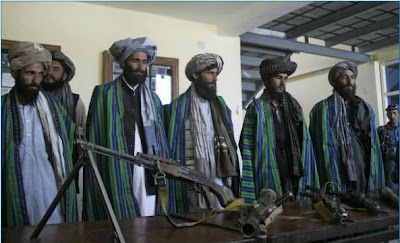 Former Taliban fighters hand over their weapons to Afghan police as part of a reconciliation process in Herat, Afghanistan, Sunday, May 13, 2012. Taliban leaders including one of the most senior members of the organization, Agha Jan Motasim told The AP that most Taliban supported a negotiated end to the protracted war in Afghanistan. (AP Photo/Hoshang Hashimi)(Credit: AP)

Kathy Gannon has a revealing article on what the Taliban want.


“One of the most powerful men on the Taliban council, Agha Jan Motasim, nearly lost his life in a hail of bullets for advocating a negotiated settlement that would bring a broad-based government to his beleaguered homeland of Afghanistan.

In an exclusive and rare interview by a member of the so-called Quetta Shura, Motasim told The Associated Press Sunday that a majority of Taliban wants a peace settlement and that there are only "a few" hard-liners in the movement.”

“Looking ahead to next week's NATO summit in Chicago, Motasim said he had a message for participants.

“Kathy Gannon of Associated Press goes back a long way to almost where it all began in the 1980s in the Afghan civil war, and she began reporting from the rim of the volcano. Trust her to have got through to the Taliban’s Quetta Shura to someone who is “one of the most powerful men” within that council — Agha Jan Motasim. The AP interview with Motasim gives a rare insight into the wheels within wheels of what passes for the Taliban movement — or rather, what it has become through the tumult of these 2 decades behind us.

The Taliban have 3 demands: release of all Afghan prisoners languishing for years in Guantanamo Bay and Bagram; removal of their names from the United Nations “blacklist”; and, recognition as a political party. Pray, is it too much to ask for in a lifetime?

Of course, there are “hardliners” within the Taliban family. But then, they are there everywhere — be it in our life at home, or away from home. It’s a human trait. Why be obsessive about it and give it a centrality it doesn’t deserve? Isolate it; we could tell the Haqqanis some day, as Dante wrote, “Consume within thyself with thine own rage.”

The overpowering sense of Motasim’s remarks is a sense of exhaustion, like in the Uncle Tupelo song “Looking For A Way Out” — when you find you can’t somehow / make it like all the rest / you won’t need to scrounge around for someone else / torn between the unknown / and the place that you call home / and the life that you want but have never known…”