A Deadly Day | 68 Killed Across Afghanistan 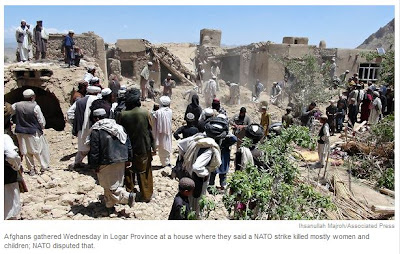 The Associated Press is reporting that 18 civilians were killed after NATO aircraft bombed houses in support of a joint Special Forces night raid. The raid in Logar province was targeting a local Taliban leader. NATO is disputing the figures.

In Kandahar three bombs killed 22 in a busy market in Kandahar City. The Taliban took responsibility for the attack that targeted Afghan security forces outside a sprawling NATO base in the southern city.

The Afghan Interior Ministry reports that the “Afghan army and police, backed by the NATO-led coalition forces, have eliminated 26 Taliban insurgents during cleanup operations within the past 24 hours…”

NATO also reports that two soldiers died in a helicopter crash in an undisclosed location.

Alissa J. Rubin and Taimoor Shah have a sobering summary in the NYT’s of the years deadliest day for civilians.

Records kept by Xinhua, based on figures released by Afghan Interior Ministry, reveal that around 400 insurgents have been killed, 120 wounded and nearly 450 others detained since May 1 during military operations across the insurgency-hit country. Xinhua is the official press agency of the People's Republic of China.


Just last week the United Nations announced a decline in civilian deaths for the first time since they started keeping track. The figures were reported during a press conference in Kabul. The report has yet to be released publicly.


“The number of Afghan civilians killed has dropped 36 percent so far this year compared with last, the U.N. said Wednesday, the first time the death toll has declined over multiple months since the United Nations started keeping track.”

Civil society organizations have been united in their appeal that in conjunction with the removal of foreign forces and disarmament efforts, there needs to be an inclusive political process to address the roots of conflict.

In fact, the recent report Unheard Voices: Afghan Views on the Peace Process finds just that.


“Many people see the obstacles to the peace process as external to the country, whereas solutions are more readily identified as internal. Locally, specific conditions in localities such as Marjah and Qadis, in Helmand and Badghis, showed distinct perspectives on questions related to Taliban demands and government strength respectively.”

Earlier in the month the NGO safety Office did release the finding of their monitoring finding that levels of violence from all actors in Afghanistan decreased except for the Afghan security forces which is increasing. 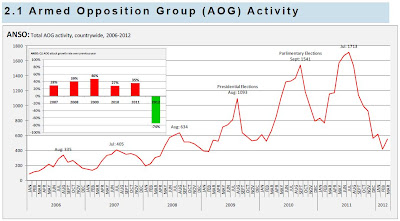 “Armed Opposition Groups (AOG) attack volumes have decreased by 43% in comparison to Q1 2011 providing the first reliable indicator that the conflict may be entering a period of regression after years of sustained, and compounded, growth by all actors in the field. Despite this, one must still consider them an ascendant power, as they themselves clearly do, and a key question remains as to whether this lack of activity is a deliberate act and if so, why. As last year was characterised by AOG doing more earlier; this year has begun with them doing less later. 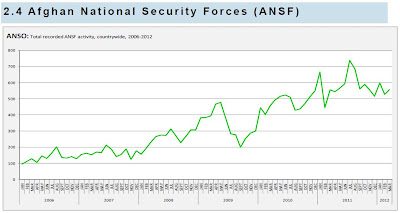 Of course, the same could be said for all actors in the field, as this years comprehensive incident volumes are 32% lower than Q1 2011, suggesting a level of synergy between the various parties to the conflict. An exception to this would be the ANSF, who are increasingly shouldering a heavier burden as the ISAF presence wanes, all part of the ongoing processes of withdrawal and transition. There are hints that this fundamental shift in responsibility may result in positive developments, particularly at the tactical level. This apparent willingness between the remaining players to reach local agreements may ultimately result in a broader space within which the NGO community is able to operate, as the volume of actively contested space shrinks.” 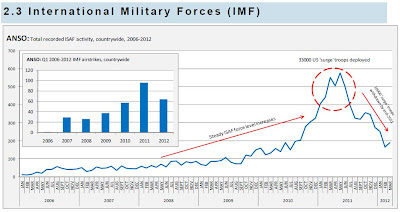 “Ultimately, the first quarter of this year raises more questions than it answers by providing numerous indicators of the increasingly fluid nature of the conflict. A new phase in the evolution of the context is being realised, though how this will play out in the coming months, and years, is unclear and only with further analysis of the interplay between the various groups will this new reality become apparent.”