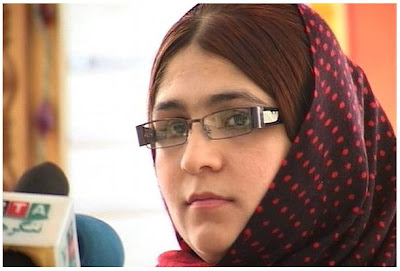 Hijratullah Ekhtyar has a nice profile of TV journalist Sanga Jabarkhil for the Institute for War and Peace Reporting*. At 21, Sanga is the head of Radio Television of Afghanistan’s Nangarhar office.


“By the age of 15, she had begun working for the state-owned Radio Television of Afghanistan, RTA, in Nangarhar, balancing this against her school studies. She told her family she was working on a magazine rather than in broadcasting.

When her first report – on arranged marriages – was aired, her relatives were mortified rather than proud.

“After hearing me on the radio, all my family members stopped talking to me. I stayed in my room, apart from them, and this lasted for a whole year,” Jabarkhil recalled.

Her relatives believed she was working alongside male colleagues, which they viewed as quite unacceptable.

For many conservative Afghans, simply working in a mixed-sex environment is immoral behaviour for a woman, and makes her an unattractive marriage prospect.

It took a long time to win the family over, although Jabarkhil’s mother Nuria was always quietly supportive.

Ultimately, only an elder brother remained opposed to her career choice.

“My brother didn’t talk to me, he didn’t look at me and even avoided coming face-to-face with me,” she said. “He told me, ‘Whenever I am sitting with friends and you appear on the TV screen, everyone looks at me and asks whether you are my sister. I feel ashamed; it’s like dying.’”

Jabarkhil even took her brother to work to assure him that women at RTA Nangarhar worked in a separate office from the men.

Goal of the Institute for War and Peace Reporting


"Journalism in areas of crisis is itself invariably in crisis, suffering repression, lack of financing and independence, and an absence of professional skills and ethics. IWPR's core mission is rooting professional journalism skills deeply within individuals and within societies. From the Balkans to Iraq and beyond, IWPR has played a leading role in establishing a leadership cadre across local media and across regions. Capacity-building initiatives strengthen media institutionally, from management training to establishing local radios and news agencies. IWPR is especially known for intensive, one-on-one, apprentice-style training from basic journalism to human rights and elections reporting."