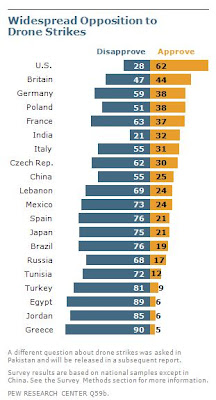 Every wonder how people around the world view the impact of US policy and drones?

The findings of the latest survey are made clear in the title “Global Opinion of Obama Slips, International Policies Faulted”

Gibran Ashaf, writing for the Express Tribune, offers a perspective from Pakistan. A country that has seen more people killed than any other from the CIA drone attacks.

One theme? Drone strikes are opposed by women more than men.


“It is little secret that the controversial drone strike programme operated by the US has been strongly opposed by many countries. The latest PEW poll from 21 countries reinforced international opposition to the programme with 18 countries, including key allies, disapproving. Interestingly, a gender breakdown of the poll results showed women expressed greater disapproval of drone strikes than men globally.

The report did not ask the question in countries which suffer from the drone strikes, Afghanistan, Yemen and Somalia. The report said a different question was asked in Pakistan, the result for which will be released in a subsequent report.

The countries where the strikes found most favour was in the US (62 per cent), UK (44 per cent – but with 47 per cent disapproval).

In what would be considered a blow, major allies of the US in the war against terror were opposed to the strikes programme, including France (63 per cent), Germany (59 per cent ), Italy (55 per cent) .

A gender breakdown of the poll results showed an interesting aspect to the opposition, with more women disapproving of the controversial programme.

With the US claiming ardent success of its drone programme, the latest feather being the scalp of al Qaeda’s deputy commander Abu Yahya al Libi. But with mounting debate of its legality, the White House maintains the strikes are per US laws.

Though the question of its legality has arisen with rights groups seeking to file a law suit against the US government on behalf of the survivors and relatives of strike victims.

Recently, the question of the programme’s legality was raised from within the US Congress, with members writing a letter to President Barack Obama to explain under which tenets of the Constitution were the strikes being operated and what was the criteria being employed to select targets, thereby efforts to minimise civilian casualties.”

The Express Tribune is the first paper in Pakistan to partner with The International Herald Tribune.