Troop Suicides Surging | I Am Who Survived (a poem) 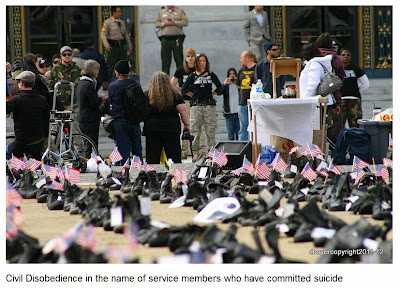 Image from the Eyes Wide Open Exhibit at San Francisco’s City Hall. It was displayed on 19 March 2012 to mark the 9th Anniversary of the War in Iraq.


“Suicides are surging among America's troops, averaging nearly one a day this year – the fastest pace in the nation's decade of war.

The 154 suicides for active-duty troops in the first 155 days of the year far outdistance the U.S. forces killed in action in Afghanistan – about 50 percent more – according to Pentagon statistics obtained by The Associated Press.”

-Robert Burns, Military Suicide Rate Surges To Nearly One Per Day This Year.


“More than 6,500 veteran suicides are logged every year — more than the total number of soldiers killed in Afghanistan and Iraq combined since those wars began.”

This Poem, published by the Warrior Writers Project, hints why.


I AM WHO SURVIVED

I am a Christian
who survived 9 commandments but violated one
Thou shalt not kill
Plain and simple right?
It's more complicated than that
I followed my leaders with a long black crucifix in my hands
I loaded proverbs into magazines and shot them out of my crucifix
I carried bibles in my grenade pouches.
Forgive me father, for I have sinned
I have allowed bearers of false witness to burn you in an oil fire
I have allowed false idols to drop you on innocent victims, killing some, and disfiguring others
I have killed and allowed killing
I shall never kill again
I shall never get lost in the sandstorm of lies and shoot my way out.
Who survived?
I might have, but my faith didn't

What you can do

Iraq Veterans Against War seek to address this issue through operation recovery.

AFSC Resource | The War Within: The Veteran Suicide Epidemic