Afghan Refugees in Pakistan | A Journey into the Unknown 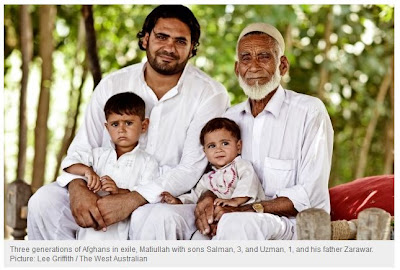 "After 31 December 2012, there is no plan to extend the validity of the POR [proof of registration] cards of Afghan refugees. Those currently registered will lose the status of refugees. They will be treated under the law of the land. The provincial governments have already been asked to treat the existing unregistered refugees as illegal immigrants.”
- Habibullah Khan, secretary of the ministry of states and frontier regions.

There are currently 1.7 million Afghan refugees registered in Pakistan – more than half of them under 18 – of whom 630,000 live in camps.

“Malik Sakhigul was just 28 when he ran away from Afghanistan. Soviet troops had swept through the country so he grabbed what little he could and led his parents and three daughters east across the border into Pakistan. More than three million of his countrymen ended up joining him.

Now 60, he returned home this month in a secret trip that marked the first tentative steps towards a permanent return - part voluntary and part under duress - and attempted to answer the question hanging over the heads of millions of Afghans in exile around the world: is it finally safe to go back?

"I went to see the conditions," he said last week.

"I wanted to see whether we will have a place to live there or not."

Malik is one of the elders at the Utmanzai refugee camp - a dry, dusty collection of mud huts in Pakistan's north-west, surrounded by cemeteries and filled with children who sing old songs of the beauty of a neighbouring country that to them is little more than legend.

"The younger ones think it is a magical place," one aid worker explains, "they only know it from the songs which describe Kabul as a most beautiful city with the bravest people in the world."

"It is when the children get older, about six years, that they start to learn what has happened."

Utmanzai sprang up during the Russian invasion of Afghanistan 33 years ago, when hundreds of thousands of Afghans fled for their lives across the border and sought refuge in Pakistan, kicking off [one of] the world's longest-running refugee crisis and creating what still is the biggest cluster of refugees anywhere in the globe, reaching a peak of more than four million.” 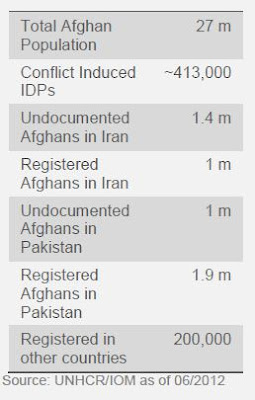 PESHAWAR, 24 July 2012(IRIN) - Pakistan is putting pressure on the estimated 2.8 million Afghan registered and unregistered refugees to return to their homeland by the end of 2012.

The government has said it will not renew the ID cards of the 1.8 million registered Afghan refugees.

Last week, Habibullah Khan, secretary in the Ministry of States and Frontier Regions, was quoted by the media as saying: "The international community desires us to review this policy but we are clear on this point. The refugees have become a threat to law and order, security, demography, economy and local culture. Enough is enough.

"After 31 December 2012, there is no plan to extend the validity of the POR [proof of registration] cards of Afghan refugees. Those currently registered will lose the status of refugees. They will be treated under the law of the land. The provincial governments have already been asked to treat the existing unregistered refugees as illegal immigrants.”

“Asylum space is narrowing given that the government of Pakistan is pretty serious about returning most of them to Afghanistan,” said Aamir Fawad, protection officer with the UN Refugee Agency (UNHCR). “We are talking to the government to extend, but it is unclear what will happen.”

In June, Pakistan agreed to delay the forced repatriation of 400,000 Afghans who were rounded up in Peshawar for being in the country illegally.

“There is increased pressure on them to either move to camps or repatriate,” one aid worker who preferred anonymity told IRIN. “Every day, I see people being harassed by the security officials. Those living in refugee villages are facing pressure from landlords as well. Yet at the same time, the situation in Afghanistan is not attractive for return.”
Posted by Peter at 10:18 AM