Why We Don't Count Afghan Deaths 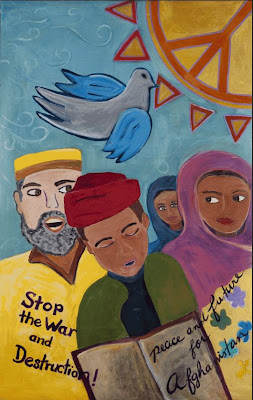 In February the United Nations reported for the fifth year in a row that civilian deaths had increased.

Reporting on violence against Afghans has become so internalized that only spectacular events and high profile assassinations get attention. Recent events have again highlighted the legacy that Afghans will have to deal with in the future.

It is impossible for anybody to say that the U.S. has contributed to Afghanistan’s long-term security, reduced the possibility of long-term conflict, or strengthened institutions that can bring long-term stability.

“Violence in Afghanistan is at its fiercest since U.S.-led Afghan troops overthrew the Taliban government in 2001…” - Monday 16 July | Reuters


“The targeting of Afghan women leaders in government positions is not a new phenomenon. Safia Amajan held the same position as Safi in Kandahar. Sitara Achakzai was a provincial council member. Malalai Kakar was provincial chief of female police in Kandahar. A number of women aid workers, whose names and identities are not recorded, have also been murdered.”


“Among those killed were the provincial head of the intelligence service, the NDS, Engineer Muhammad Khan, the police commander for western Afghanistan, Sayed Ahmad Sameh and the head of training for the Afghan National Army in Balkh province Muhammadullah. One of the Balkh MP, Eshaq Rahgozar, was wounded, as was the former Sar-e Pul governor, Sayed Iqbal Munib."

Susan G. Chesser writing for the Congressional Research Service on casualties earlier this month makes the point that we do not track the deaths of Afghan Army and Police.


“Because the estimates of Afghan casualties contained in this report are based on varying time periods and have been created using different methodologies, readers should exercise caution when using them and should look to them as guideposts rather than as statements of fact.”

“Reporting on casualties of Afghans did not begin until 2007, and a variety of entities now report the casualties of civilians and security forces members. The United Nations Assistance Mission to Afghanistan (UNAMA) reports casualty data of Afghan civilians semiannually, and the U.S. Department of Defense occasionally includes civilian casualty figures within its reports on Afghanistan. …From July 2009 through April 2010, the Special Inspector General for Afghanistan Reconstruction (SIGAR) included statistics of casualties of members of the Afghan National Army and Afghan National Police in its quarterly reports to Congress. SIGAR has ceased this practice, and there is no other published compilation of these statistics. This report now derives casualty figures of Afghan soldiers and police from the press accounts of the Reuters “Factbox: Security Developments in Afghanistan” series, the Pajhwok Afghan News agency, the Afghan Islamic Press news agency, Daily Outlook Afghanistan from Kabul, and the AfPak Channel Daily Brief."

Afghanistan's former intelligence chief Amrullah Saleh in an interview on Sunday said there has been no improvement in security situation in recent months.

The Humanitarian Bulletin for June by the United Nations Office for the Coordination of Humanitarian Affairs (OCHA) states that “… almost one million children under five years to be acutely malnourished in Afghanistan.”