The release of a video showing a young woman’s public execution was absolutely heart breaking. There was a public protest in Kabul today calling for an end to gender-based violence. 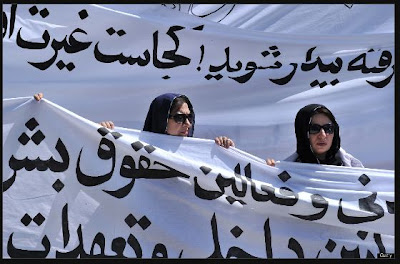 Afghan women march with banners to protest the recent public execution of a young woman for alleged adultery, in Kabul on July 11, 2012. (MASSOUD HOSSAINI/AFP/GettyImages)


“Today, for the second time this year, progressive Afghans took to Kabul’s streets to voice their outrage at a gruesome act of gender-based violence and demand justice for the victim. This time, the demonstration was prompted by the extrajudicial execution of a young woman named Najiba in a village less than two hours from the capital.

Last week, shocking video of the crime emerged online, causing uproar among civil society activists and human rights advocates. The New York Times published this unsparing description of the footage, which quickly went viral and is still available on the Guardian’s website." 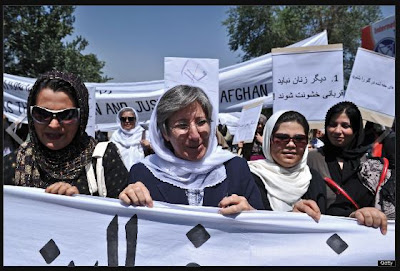 Massoud Hossaini, recipient of the Pulitzer Prize last year for his work in Afghanistan has a slideshow of the demonstration.

Una Moore writes for UN Dispatch and has a great site called transitionland.

Young Women for Change have been focused on this issue for a long time. Check out their engaging facebook page.