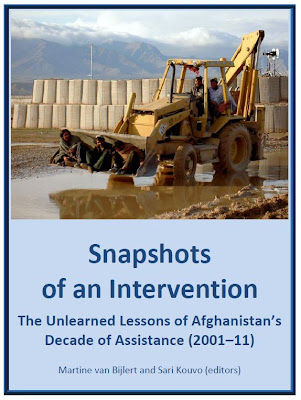 Snapshots of an Intervention
The Unlearned Lessons of Afghanistan’s Decade of Assistance (2001–11)
Afghanistan Analysts Network, July 2012

The decade of state-building, reconstruction and development assistance in Afghanistan has left many people confused. There have been undeniable changes: Afghanistan now has an election-based, market-driven political system and many socio-economic indicators are far better than they used to be under Taleban rule or during the civil war (although that is, admittedly, not a very high bar). There have been great, albeit unequal, opportunities in terms of education, employment and enrichment. But there is also a strong sense of missed and mismanaged opportunities, which many – Afghans and internationals alike – find difficult to understand: how could so many resources have achieved what feels like so little and so fleeting?

This edited volume explores the question by taking a closer look at a variety of key programmes and projects that were designed and implemented over the last decade, or more. It consists of a collection of 25 articles by analysts and practitioners with long histories in the country, who were closely involved in the programmes they describe. The contributions present a rare and detailed insight into the complexity of the intervention in Afghanistan – including the often complicated relations between donors and representatives of the Afghan government (with projects tending to be nominally Afghan-led, but clearly donor-driven), the difficulties in achieving greater coherence and leverage and, in many cases, the widely shared failure to learn the necessary lessons and to adapt to realities as they were encountered.

The experiences that the authors describe will probably sound all too familiar to anyone who has worked in post-conflict, aid-heavy contexts: the popularity of ‘trophy projects’ (Wiles), the proliferation of ‘encyclopaedic wish lists’ as a result of cumulative planning sessions (Leslie), the diplomatic wrangling to be given a seat at the table (Wilkens), the empty government buildings due to faulty planning (Horne), the frustration of trying to secure government buy-in for measures that threaten to disturb the political and economic status quo (Barr). They will also recognise the tendency for political expediency to trump long-term institution-building and accountability (Ruttig, Olexiuk, Kouvo) and the dubious role that post-conflict elections play in a country’s democratisation (Smith, Slavu).

The overarching lesson of the volume is probably that the key tools of the international assistance intervention – the protracted policy processes and coordination mechanisms, the large and inflexible assistance budgets, the focus on capacity building through mentoring and technical assistance – have proved to be very blunt indeed. There were successes to be found in the cracks, but mainly where a coherence of vision, realism and a fair amount of political will on the Afghan side ensured that good use was made of the resources provided.

The release of this book ahead of the Tokyo conference in July 2012 serves as a reminder of the recurring gaps between ambitious plans and conference statements on one hand and the subsequent realities of aid programming and implementation on the other. It is hoped this volume will help fortify the institutional memory of the donor community in Afghanistan, preventing future lapses and helping enable a greater capacity to learn world-wide. The lessons that have not been learned have relevance far beyond Afghanistan.