Afghanistan in Transition: Putting Children at the Heart of Development |STC 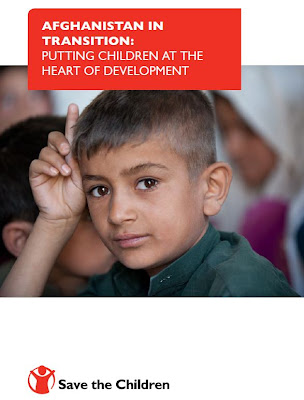 — Staffan de Mistura, UN Security Council (UNSC), 6 July 2011, referring to the 2014 date by which “transition” is slated to be completed and the 1989 Soviet withdrawal from Afghanistan that led to the Afghan Civil War.

“This report will assess the record of the international community in its efforts to achieve development success in Afghanistan. The first section will assess the progress in the last 10 years through achievements made in key social sectors, such as health, education and child protection. The second section will look at the reasons that progress has been slow; arguing that geographic inequity in donor funding, lack of adequate funds to basic services and misappropriation of aid has stunted progress. Finally, the third section will look at the transition period and make recommendations regarding development and governance to both the Government of the Islamic Republic of Afghanistan (GIRoA) and the international community. It suggests a sustainable agenda for development in Afghanistan that focuses on a needs-based and community-led approach, promotes accountability to the Afghan people and donor public, and builds government capacity.”

Save the Children in Afghanistan

"Save the Children is an independent non-governmental, non-profit organisation that fights for a world in which every child attains the right to survival, protection, development and participation. Our mission is to inspire breakthroughs in the way the world treats children, and to achieve immediate and lasting change in their lives. We work in 120 countries worldwide.

Save the Children has worked in Afghanistan since 1976 and we currently reach over 3 million children per year through our programmes. We work directly in 9 provinces, providing protection, health and nutrition and education programming in the northern provinces of Faryab, Jawzjan, Sari Pul, Balkh and Samangan; the central province of Bamyan and Kabul; the eastern province of Nangahar, and in Kandahar and Uruzgan in the south. We work in a further 10 provinces through partners."

The authors are clear-eyed on the work ahead, noting that Afghanistan in 2001 represented an extraordinarily low base for development efforts.

Achievements in the Last Decade:

• There has been a 26 percent reduction in child mortality over the past decade.
• Today 85 percent of the population has access to primary health care, up from 9 percent in 2001.
• The number of Community Health Workers has increased to 20,000 (by the end of 2008), compared to 2,500 in 2004.
• Vaccine coverage for children against the childhood diseases of diphtheria, tetanus and whooping cough is at 83 percent, compared to just 31percent in 2000.
• In 10 years primary school access rates have jumped from 1 million to 7 million.
• A decade ago not a single formal girls’ school was functioning; now over 2.5 million girls are in school.
• The promotion and protection of child rights has improved. Afghanistan ratified the UN Convention on the Rights of the Child in 1994 and submitted its first report in 2008.

550 — the number of children who die every day in Afghanistan of preventable causes, primarily of diarrhea and pneumonia

37,000 — the number of street working children in Kabul

4 million — the number of children out of school, accounting for 42% of the school-age population

8.3 million — the number of children in school today

$300 — the cost of training one Community Health Worker, who can save thousands of children’s lives

$70bn — the total sum committed by the international community for security, governance and development in Afghanistan since the intervention in 2001

13 years, beginning in 2001 — the length of time international community will have been ‘on the ground’ and allocating large-scale development funding by the time the military ‘transition’ is due to be completed

14 years, beginning in 2001 — the timescale set by the international community for the realisation of the Millennium Development Goals