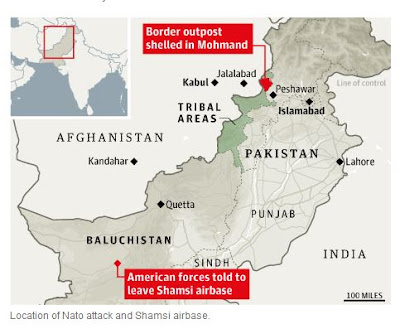 Late Saturday evening, US attack helicopter gunships and jet fighters killed 24 Pakistani soldiers in a cross border raid. There are conflicting accounts of what happened, with US/NATO forces claiming the attack originated from Pakistan and Major General Athar Abbas, chief spokesman for the Pakistan military, stating "I cannot rule out the possibility that this was a deliberate attack by ISAF…"

Pakistan has responding by shutting down NATO supply routes into Afghanistan and giving the U.S. 15 days to remove the Central Intelligence Agency from the Shamsi air base that is a key facility for drone strikes in both countries. Nearly half of the US/NATO land shipments travel through Pakistan.

Steven Lee Meyers writing today in the NYT’s looks at the US military strategy, noting that “[A] major offensive last month involving 11,000 NATO troops and 25,000 Afghan fighters in seven provinces of eastern Afghanistan killed or captured hundreds, many of them using Pakistan as a base.” The attacks are symbolic of the US policy of “fight, talk, build” which seeks to try and negotiate while still fighting.

One of the demands that came out of the recent Loya Jirga on a long-term US military presence was a prohibition on allowing US forces to attack bordering countries from bases in Afghanistan. It is certainly a demand the Afghan Parliament will makes as well.

Additional resources from Afghanistan 101 Pakistan posts.
Posted by Peter at 8:57 AM