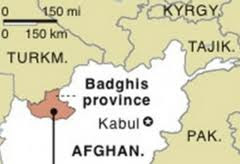 The Associated Press is reporting a roadside bomb has killed 11 in northwestern Afghanistan. The Afghan Interior Ministry says “nine of the 11 killed were from one family, including six children and two women. Two policemen were also killed while three people - a 10-year-old child and two other policemen - were wounded.”

"A ministry statement on Tuesday says the bomb went off as a police vehicle was driving by Monday evening in Badghis province's Qadis district. The vehicle was part of a three-vehicle police convoy that had stopped shortly before to pick up a family that needed a ride into town."

Some Background: The violence does not take place in a vacuum.

The Guardian newspaper has a revealing interactive graphic that gives a sense of the 'cycle of violence'. The graphics document and detail US/NATO kill-capture operations throughout Afghanistan. It is based on research by the Afghanistan Analysts Network who went through and analyzed all of the NATO press releases.

Their findings clearly show that the vast majority of people killed or captured in the NATO actions were civilians. Not Taliban leaders and facilitators.

Here are the specific figures for US/NATO attacks in Badghis Province.