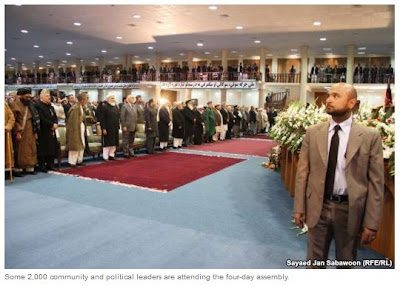 More than 2,000 invited politicians, tribal leaders, and clerics have gathered for four days of debate on critical issues facing the country. In addition to relationships with Afghanistan's neighbors, the future US-Afghanistan strategic partnership and a consensus for a path towards negotiations with the Taliban are the key issues.

The gathering is not without controversy. Members of Parliament have called it unconstitutional and political groups are boycotting the gathering.

In preparing for the Jirga, the commission’s spokeswoman Safia Sediqi highlighted that this was a ‘traditional’ Jirga.

"...the decisions of this particular jirga are not binding. The traditional loya jirga will only provide the Afghan government with general advice."

Kate Clark from the Afghanistan Analysts Network has a good summary of day one and the presidents vision. This is an excerpt.

"President Karzai said the jirga would deal with nothing but the strategic partnership agreement and peace talks, thereby denying rumours that he might use the jirga to change the Constitution to lengthen his term in office or allow him to run again. He also repeated many times that this was an ‘advisory jirga’ and the government needed the ‘people’s advice’ to allow them to make the right decisions about Afghanistan’s future. In other words, the jirga is not a decision-making body.

There was almost nothing new of substance in the speech and journalists, looking for news, have been struggling to report on the jirga in an interesting way. Possibly the only fresh line was a reference to Iran being a little more reasonable (aqlani) than the US in the dealings between the two countries.

The aim of the jirga appears not to be to deliver fresh policy, but to get political cover, so that the President can cite it as evidence that the people supported a deal with the Americans and that his government is not, to use Sighbutullah Mujadiddi’s term, watan frush, sellers out of the nation (more below).

Using repetition, homely similes and bonhomie, the President tried to hide the unpleasant fact at the heart of his policy: Allowing permanent US military bases – or ‘institutions and establishments’ as he described them – on Afghan territory will inevitably compromise national sovereignty. Yet the President repeatedly emphasised that he wanted both the strategic partnership and independence. The inherent tension in this came across in contradictions and convoluted messaging..."