The Drone War in Pakistan 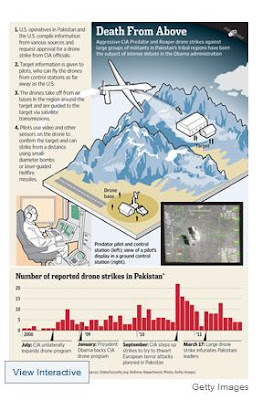 "Signature strikes target groups of men believed to be militants associated with terrorist groups, but whose identities aren't always known. The bulk of CIA's drone strikes are signature strikes.

This Wall Street Journal article outlines the struggle behind the scenes over the undeclared CIA drone war in Pakistan. The battle is not over the covert use of drones, but the number of people being killed.

“The Central Intelligence Agency has made a series of secret concessions in its drone campaign after military and diplomatic officials complained large strikes were damaging the fragile U.S. relationship with Pakistan.

The covert drones are credited with killing hundreds of suspected militants, and few U.S. officials have publicly criticized the campaign, or its rapid expansion under President Barack Obama. Behind the scenes, however, many key U.S. military and State Department officials demanded more-selective strikes. That pitted them against CIA brass who want a free hand to pursue suspected militants.”

On Thursday the NYT’s ran a powerful piece on the impact of CIA war in Pakistan.

For Our Allies, Death From Above
By CLIVE STAFFORD SMITH

"LAST Friday, I took part in an unusual meeting in Pakistan’s capital, Islamabad.

The meeting had been organized so that Pashtun tribal elders who lived along the Pakistani-Afghan frontier could meet with Westerners for the first time to offer their perspectives on the shadowy drone war being waged by the Central Intelligence Agency in their region. Twenty men came to air their views; some brought their young sons along to experience this rare interaction with Americans. In all, 60 villagers made the journey.

The meeting was organized as a traditional jirga. In Pashtun culture, a jirga acts as both a parliament and a courtroom: it is the time-honored way in which Pashtuns have tried to establish rules and settle differences amicably with those who they feel have wronged them.

On the night before the meeting, we had a dinner, to break the ice. During the meal, I met a boy named Tariq Aziz. He was 16. As we ate, the stern, bearded faces all around me slowly melted into smiles. Tariq smiled much sooner; he was too young to boast much facial hair, and too young to have learned to hate.

The next day, the jirga lasted several hours. I had a translator, but the gist of each man’s speech was clear. American drones would circle their homes all day before unleashing Hellfire missiles, often in the dark hours between midnight and dawn. Death lurked everywhere around them.

When it was my turn to speak, I mentioned the official American position: that these were precision strikes and no innocent civilian had been killed in 15 months. My comment was met with snorts of derision.

I told the elders that the only way to convince the American people of their suffering was to accumulate physical proof that civilians had been killed. Three of the men, at considerable personal risk, had collected the detritus of half a dozen missiles; they had taken 100 pictures of the carnage.

In one instance, they matched missile fragments with a photograph of a dead child, killed in August 2010 during the C.I.A.’s period of supposed infallibility. This made their grievances much more tangible.

Collecting evidence is a dangerous business. The drones are not the only enemy. The Pakistani military has sealed the area off from journalists, so the truth is hard to come by. One man investigating drone strikes that killed civilians was captured by the Taliban and held for 63 days on suspicion of spying for the United States.

At the end of the day, Tariq stepped forward. He volunteered to gather proof if it would help to protect his family from future harm. We told him to think about it some more before moving forward; if he carried a camera he might attract the hostility of the extremists.

But the militants never had the chance to harm him. On Monday, he was killed by a C.I.A. drone strike, along with his 12-year-old cousin, Waheed Khan. The two of them had been dispatched, with Tariq driving, to pick up their aunt and bring her home to the village of Norak, when their short lives were ended by a Hellfire missile.

My mistake had been to see the drone war in Waziristan in terms of abstract legal theory — as a blatantly illegal invasion of Pakistan’s sovereignty, akin to President Richard M. Nixon’s bombing of Cambodia in 1970.

But now, the issue has suddenly become very real and personal. Tariq was a good kid, and courageous. My warm hand recently touched his in friendship; yet, within three days, his would be cold in death, the rigor mortis inflicted by my government.

And Tariq’s extended family, so recently hoping to be our allies for peace, has now been ripped apart by an American missile — most likely making any effort we make at reconciliation futile."

Clive Stafford Smith, an American lawyer, is the director of Reprieve, an organization that advocates for prisoners’ rights.

For more details about Reprieve, visit this post.
Posted by Peter at 3:16 PM