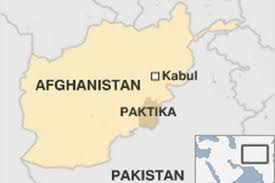 The Associate Press is reporting that 60 to 70 people have been killed after an attack on a NATO/Afghan base along the border with Pakistan.

Mokhlis Afghan, a spokesman for the governor of Paktika, told the BBC:

"Between 60 and 70 insurgents attacked a joint NATO-Afghan National Security Forces (ANSF) base in Bermal district's Margha area on the border with the Durand line.

There were no civilian, NATO or ANSF casualties.”

Last month the New York Times ran a profile on the increasing violence along the border with Pakistan. At the time, these were my thoughts.

“It says something about the way the war is fought in Afghanistan when having your hands tied means you need to limit the number of high explosive weapons used and must refrain from using artillery shells with White Phosphorus.”

Reports on the fighting show there were no such restraints this time with US/NATO aircraft killing all of the insurgents.