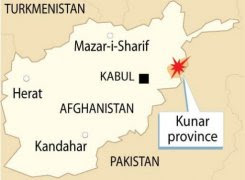 The Associated Press is reporting that "NATO and Afghan forces have killed at least 115 insurgents over the past week as part of an ongoing operation in a northeastern Afghanistan province."

“NATO said the operation has been going on since around Oct. 15 and has included the use of fighter jets and long-range bombers.”

Last week, a study of NATO press releases by the Afghanistan Analysts Network found that 5% of the casualties from NATO attacks were 'leaders' or 'facilitators'.

NATO continues to claim they are deliberate in their targets.

"The fact is, we target bad guys," said Nicholas Conner, NATO Spokesperson. In tandem with NATO's Afghan partners, "we go after them wherever they are; whoever they are."

The details of the on-going campaign coincides with a surprise visit by Secretary of State Hilary Clinton who is in Kabul urging Afghan officials to continue negotiating with Pakistan and the Taliban.
Posted by Peter at 11:58 AM