The Afghan Experience with War 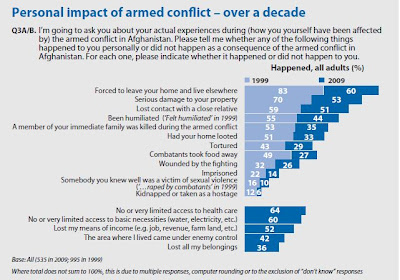 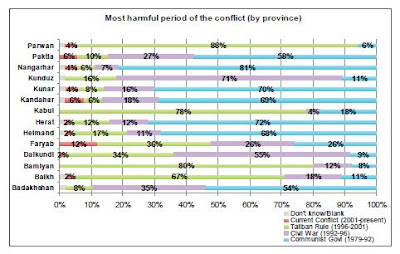 Around the same time, eight nongovernmental organizations operating in Afghanistan conducted research in 14 provinces to better understand how Afghans experienced and understood the past thirty years of conflict. The different phases of the war is captured in this quote.

“Wars have no difference. The mujahadeen killed my father and then the Taliban tortured and killed my brother. It is always the people who are suffering.” – Female, Daikundi

The top graph is from the ICRC report, the bottom from the cost of war.

Our World, Views From the Field
Afghanistan Opinion and In-Depth Research, 2009
International Committee of the Red Cross/Crescent


Despite displacement and exile, Afghans have maintained their political, cultural, and social identity, and family livelihoods through extensive networks of remittances. They possess the capacity to build their own country, but need assistance breaking the crippling dependency on spending related to the presence of international military and donor organizations. Consider: The World Bank finds that 97 percent of Afghanistan’s gross domestic product stems from those sectors.

That money comes at a cost.

The US and the international community put conditions and demands on how their money is spent. Pushing Afghan institutions in directions that are unsustainable and will insure more conflict and violence. Instead of creating a militarized state with a standing army costing an estimated $6 to 8 billion we could invest in and support sustainable institutions. For example, fully funding the government’s ambitious five-year strategic plan for the ministry of education would be $2.5 billion.

Until the US, the most powerful economic and military force in Afghanistan, embraces these goals, as well as a genuine peace process that includes all parties to the conflict, nascent Afghan institutions will never have a chance.

The $10 billion per month the US spends on the war in Afghanistan could make a very big difference in funding education, health care and other infrastructure needs both in Afghanistan and in our own country.

It's time to get the troops and weapons out.
Posted by Peter at 11:13 AM