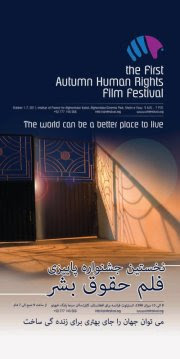 “Though there are 33 human rights film festivals worldwide, there are none in this region. Bahrain was supposed to have one, but it was cancelled following the protests [in the spring] there.” - Festival director and filmmaker Malek Shafi’i.

"Afghan filmmakers’ fiction and documentary contributions cover a range of issues: the alienation of Afghan refugees in Iran; child labor and poverty; rape; drug addiction; disability; and ethnic persecution. A chilling biopic, “Before I Was Good,” follows a young disfigured woman, Zahera, who immolated herself to protest against a forced marriage. “Half Value Life” documents the struggle of Maria Basheer, the first and only provincial chief prosecutor, as she deals with the violence faced by women in abusive domestic situations.

The films do not only cover dismal topics, however. “Look Who Is Driving” examines the director’s own efforts to challenge social taboos by enrolling herself in a Mazar-i-Sharif driving school."

Some of the other Afghan films being shown.

Shelter, animation about a homeless child who lives under a tree and becomes the friend of a bird before the war begins to change their lives forever.

Addicted in Afghanistan, is an intimate and uncompromising documentary portrayal of the day to day struggles of a new generation of children addicted to heroin.

An Apple from Paradise, follows one father’s search for his son, who is a student at a religious school in Kabul.

I want horse not wife, the story of a 10 year-old Zal who wants to have a horse instead of a wife.

Light in the Cave, a film by Sayed Suleiman Amanzad featuring his account of survival against Taliban violence in Bamyan in 1999. He was four years-old when Taliban over ran his village.

More details about the goals and challenges here.

"Jafar Panahi may be stuck in an Iranian prison, but his film is playing in Afghanistan.

The popular Iranian neo-realist filmmaker was sentenced to six years last December for his alleged role in protesting his country’s contested 2009 presidential election. Panahi’s films are banned at home, but one – “Accordion,” an insightful short about two young buskers who have their accordion confiscated, only to find their oppressor trying to earn money with it – made its way across the border for Afghanistan’s inaugural Autumn Human Rights Film Festival in Kabul on October 1."