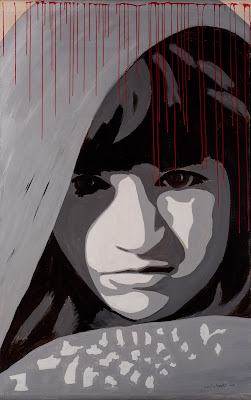 One of the two Windows and Mirrors community exhibits will begin a month-long schedule of activities in Albany starting tomorrow.

The Capital District Chapter of Women Against War will co-sponsor the exhibitions.

Skidmore, Union, Russell Sage College, and the College of St. Rose are among the region's colleges and universities that will be involved.

The costs of the Afghanistan war – on a personal and global scale – will be the subject of three upcoming events sponsored by Skidmore's Office of Religious and Spiritual Life.

On Thursday, October 13, guest speaker Donna Marsh O'Connor will lead a discussion titled "No End in Sight," about the U.S. being a nation at war. Her talk, free and open to the public, begins at 5 p.m. in Gannett Auditorium, Palamountain Hall.

On Friday, October 14, a new exhibition titled "Windows and Mirrors on Afghanistan" opens at Wilson Chapel. Skidmore is one stop on a national tour of this exhibition, which is sponsored by the American Friends Service Committee.

On Wednesday, October. 19, Ed Kinane will present "Eyewitness in Kabul: One month on war-torn Afghanistan." His talk begins at 5 p.m. in Davis Auditorium, Palamountain Hall.

Admission to all events is free and open to the public.

Donna Marsh O'Connor is the mother of three children. Her daughter Vanessa was murdered on 9/11. Vanessa worked in the South Tower of the World Trade Center and at the time of her death, was five months pregnant.

Since 9/11, Donna has worked to counter the discourse of hate and fear that has been the primary mechanism of America's violent responses to the tragedy of that day. Donna Marsh O'Connor is an adjunct faculty member in the Writing Program at Syracuse University and has taught writing and rhetoric for over 25 years.

This community exhibit is a selection of 25 installations from the originals. The war in Afghanistan is now the longest in U.S. history, yet for many of us it has been rendered largely invisible. This exhibit is an opening and an invitation to reflect upon the impact of this war on a civilian population caught in the crossfire.

Ed Kinane will talk about the effects on the people of Afghanistan of our 10-year war in their country. He had just returned from a month in Kabul and was in Iraq with "Voices in the Wilderness" for five months when the "Shock and Awe" campaign there began in 2003. He has been a lifelong activist for social causes, having traveled in Africa for three years and joining the anti-apartheid movement there and in the U.S. he has twice been jailed for participating in protests against the School for the Americas.
Posted by Peter at 1:06 PM