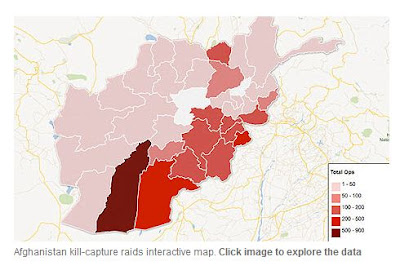 The Afghanistan Analyst Network has a new report documenting the foreign forces policy of targeted assassinations and arrests in Afghanistan. The report is based on an analysis of all 3,700+ ISAF press releases from 1 December 2009 thru 30 September 2011.

The operations known as kill/capture have long been presented by ISAF as one of the more effective parts of the international military mission in Afghanistan. A close study of press releases show that “the terms used by ISAF to denote that 'key leaders' were being killed or captured is confusing at best, misleading at worst”


The number of ‘leaders’ and ‘facilitators’ killed equals approximately 5% of the total deaths.


The number of ‘leaders’ and ‘facilitators’ detained equals approximately 13% of the total detentions.


The overwhelming number of civilian deaths prompted the writers to conclude with a question. “To what extent is violence in a particular area at least in part a product of the presence of ISAF troops?

The Guardian newspaper has a datablog (above) of interactive graphs and maps that highlight the findings of the investigation. The report itself has charts and graphs to better understand the way ISAF is fighting the war, and how they talk about it.

The missions mushroomed under General Petraeus and peaked in June 2011. There has been a steady decline since then. "The decline may well be linked to the seemingly unsustainable pace of the capture-or-kill operations coupled with the departure of General Petraeus."

About the authors:
Alex Strick van Linschoten and Felix Kuehn are researchers and writers based in Kandahar. They have worked in Afghanistan since 2006, focusing on the Taliban insurgency and the history of southern Afghanistan over the past four decades. Their research extends to other Muslim countries, and they are regular commentators on major western news channels.