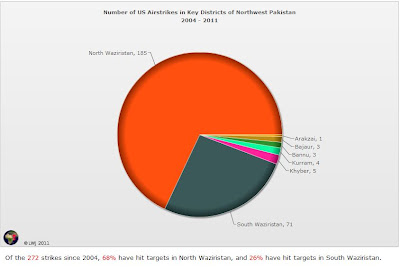 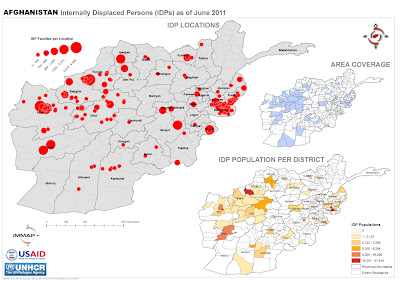 The NYT has a front page article on increased violence in Paktika Provence. The region includes a long border with North and South Waziristan in Pakistan. The details come from an embedded journalist at the US base Sharana, one of the areas of the country where the US surge has sent additional troops.

The point of the article is to show that soldiers feel their hands are tied.

It says something about the way the war is fought in Afghanistan when having your hands tied means you need to limit the number of high explosive weapons used and must refrain from using artillery shells with White Phosphorus.

The graphic above is from the Long War Journal.

The map shows the number of internally displaced Afghans along the border.

Here are the details.

“There were at least 102 of these so-called close-border attacks against the same outposts since May, including one on Oct. 7 that the American military called the largest and most coordinated insurgent operation in the province since 2009. Last year, during the same period in the same places, there were 13 close-border attacks. Most of the indirect-fire attacks, officers said, have been with 107-millimeter rockets, which have a range of about five miles.”

Interviews with soldiers focus on their frustration.

When receiving fire from Pakistan, they said, they do not return fire with white phosphorus and fire far fewer high-explosive rounds. Attack helicopters and aircraft are also less likely to fire ordnance the closer the firing position is to the border, they said, even if it is on the Afghan side.”