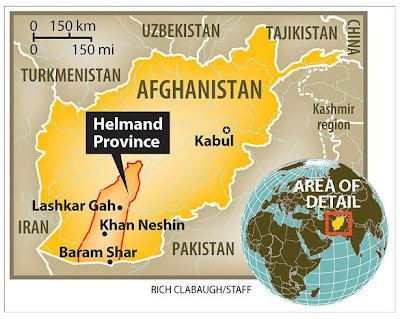 Jean MacKenzie reports about the history of the Kajaki dam project in Helmand Province. The upgrade of the dam has been billed as the linchpin of the military effort in Helmand, and key to delivering power – and of course influence – in Kandahar. It is a story of a failure.

It is also an update of a project with a very long history, and many previous failures. A project that was modeled in many ways on the Tennessee Valley Authority in the US .

It started in 1946 when the government of Afghanistan first “hired the largest American heavy engineering firm, Morrison Knudsen, Inc. of Boise, Idaho, to build a dam. Morrison Knudsen, builder of the Hoover Dam, the San Francisco Bay Bridge, and soon the launch complex at Cape Canaveral, specialized in symbols of the future. The firm operated all over the world, boring tunnels through the Andes in Peru, laying airfields in Turkey.”

It is a fascination story told by Nick Cullather.

He explores the way development was used in the post-colonial period to gain influence and sheds light on the chapter of Afghan history that is little know; when the U.S. and the Soviet Union sought influence in Afghanistan through development project and not armies.

From New Deal to New Frontier in Afghanistan: Modernization in a Buffer State

The goal of the project was to project power – by a central government – over areas of the country it had little control. It was to modernize the country. It was political, fueled eventually by the desire of the Monarchy to create a ‘Pastunistan’ consisting of most of Northern Pakistan that would address the uncertainty of Pashtuns after the partition of India in 1947.

The long history of US companies and U.S. aid.

The Helmand Valley project “came under American supervision in 1946 and continued until the departure of the last reclamation expert in 1979, outlasting the theories and rationales on which it was based. It was lavishly funded by U.S. foreign aid, multilateral loans, and the Afghan government, and it was the opposite of piecemeal. It was an “integrated” development scheme, with education, industry, agriculture, medicine, and marketing under a single controlling authority. Nation-building did not fail in Afghanistan for want of money, time, or imagination. In the Helmand Valley, the engines and dreams of modernization had run their full course, spooling out across the desert until they hit limits of physics, culture, and history.”

Here is how it starts.

“In May 1960, the historian Arnold Toynbee left Kandahar and drove 90 miles on freshly paved roads to Lashkar Gah, a modern planned city known locally as the New York of Afghanistan. At the confluence of the Helmand and Arghandab rivers, close against the ancient ruins of Qala Bist, Lashkar Gah’s 8,000 residents lived in suburban-style tract homes surrounded by broad lawns. The city boasted an alabaster mosque, one of the country’s best hospitals, Afghanistan’s only coeducational high school, and the headquarters of the Helmand Valley Authority, a multipurpose dam project funded by the United States. This unexpected proliferation of modernity led Toynbee to reflect on the warning of Sophocles: “the craft of his engines surpasseth his dreams.” In the area around Kandahar, traditional Afghanistan had vanished. “The domain of the Helmand Valley Authority,” he reported, “has become a piece of America inserted into the Afghan landscape. …The new world they are conjuring up out of the desert at the Helmand River’s expense is to be an America-in-Asia.”

“Nothing becomes antiquated faster than symbols of the future, and it is difficult, at only fifty years remove, to envision the hold concrete dams once had on the global imagination. In the mid-20th century, the austere lines of the Hoover Dam and its radiating spans of high-tension wire inscribed federal power on the American landscape. Vladimir Lenin famously remarked that Communism was Soviet power plus electrification, an equation captured by the David Lean film Dr. Zhivago in the image of water surging, as a kind of redemption, from the spillway of an immense Soviet dam. In 1954, standing at the Bhakra- Nangal canal, Nehru described dams as the temples of modern India. “Which place can be greater than this,” he declared, “this Bhakra -Nangal, where thousands of men have worked, have shed their blood, and sweat and laid down their lives as well? …When we see big works, our stature grows with them, and our minds open out a little.”43 For Nehru, for Zahir Shah, for China today, the great blank wall of a dam was a screen on which they would project the future.”