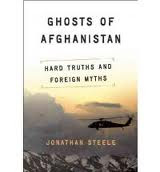 His latest book, Ghosts of Afghanistan: Hard Truths and Foreign Myths, has just been published.

"In this original look at the West's obsession with Afghanistan the ghosts include, of course, the inevitable innocents who fall in war but also the public myths, official lies and inconvenient truths that lie behind so much of the bloodshed there. In a riveting chapter, Steele also puts to rest the notion that America had no choice but to go to war after Osama bin Laden's orchestration of the 9/11 attacks." —Seymour Hersh, The New Yorker

"Ghosts of Afghanistan is the best single book on the inter-related US policy crisis in Afghanistan and Pakistan and should be read by all students of foreign affairs." —Selig S. Harrison, author of Out of Afghanistan: The Inside Story of the Soviet Withdrawal

Yes, there are dozens of books on the Afghan wars. Most of them are all about firefights and heroics. But this is the first to take the events of the war Bush and Blair started and put them in the context of the Soviet war and even the British imperial wars that preceded them, and draw the lessons out, and make a sharp summary of what should happen next. No war is ever won against the Afghans. The only option is to give up, but the military never want to give up. The politicians eventually resume control, but Obama has not overruled his generals yet.

Read Steele to see how the Russians coped; how Gorbachev ended the wasteful war, and see how Obama might. This is an extremely well-written modern history -- clear, coherent, with real explanatory power. It's a synthetic work, drawing on Steele's deep experience of the Soviet-Afghan War of 1979-1988 during which period he was the Guardian's man in Moscow, and using that to illuminate the course of war since the post-9/11 invasion.

As Steele makes plain in reporting the views of all sides on the ground, almost all Afghans simply want all foreigners off their soil whether they be jihadist Arabs or Texans, and will fight until that happens. This is, as Steele demonstrates, like all previous foreign invasions of the country, an unwinnable war for the Western allies.

Ghosts of Afghanistan stands out for the combination of its calm clarity and comprehensibility, the firmness of its arguments, Steele's stature as an analyst of the region of 30 years standing, his position as the one UK journalist who had first access to the WikiLeaks cache on Afghanistan, and his interpretation of what he found there.

10 Myths About Afghanistan | Recent article by Jonathan Steele
Posted by Peter at 11:07 AM