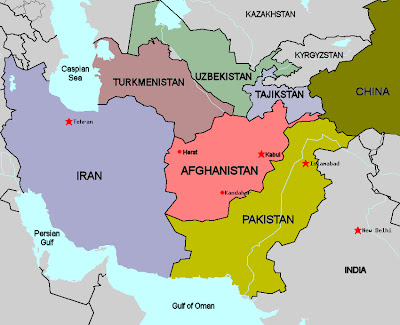 Following the death of 24 soldiers in a US cross-Border raid, the Government of Pakistan is boycotting the Bonn II gathering.

“Prime Minister Syed Yusuf Raza Gilani on Thursday said Pakistan’s decision to boycott the Bonn Conference in protest against the NATO/ISAF attack and violation of its sovereignty, was final and taken collectively. “How we can attend the conference when our sovereignty came under attack”

“So a conference about the future of Afghanistan that is meant to leave a lasting, workable regional framework in place to manage the many diplomatic, economic, and security consequences of an American withdrawal might not include four of the most important participants: Pakistan, Iran, Uzbekistan, or the Taliban. And yet, the other 90 countries that participate hope to accomplish something.

The sad reality of the U.S. endgame in Afghanistan is that it is happening completely outside a consideration of Afghanistan's politics. The war in Afghanistan is a fundamentally political war, and U.S. policymakers continue to ignore Afghanistan's (and Pakistan's) politics at tremendous cost. The worst political excesses get identified and removed, but the strategic planning -- what little there is -- is happening within American preferences and beliefs, not Afghan ones.”

In addition to the need for participation from all parties to the conflict, Afghan civil society networks have also lobbied to have more representation.

Afghan Civil Society Message to Bonn Gathering on what is expected from Government.

The second phase of transition (Inteqal) should be based on a thorough evaluation of the first phase and the lessons learned, giving full consideration to the necessary capacities, resources (human and financial), and the demands and satisfaction of the people,

Equal attention must be paid to the civilian dimension of the transition process (quality of the delivery of social services without any gender or ethnic discrimination, good governance, effective measures to curb corruption, promotion and protection of human rights, as well as the reform and independence of the judiciary) in parallel to the military aspect of transition (qualitative and quantitative support for Afghan security institutions),

It should give priority to implementing the rule of law, supporting and strengthening the democratic process and institutions (i.e. reform and independence of the electoral process, in particular), and to merit-based appointments,

It should strengthen healthy working relations between the judiciary, legislative, and executive, and specifically to establish a professional, effective, and responsive cabinet.

Beginning tomorrow you can start to check-in to a livestream of the civil society gathering that will take place on the 2nd and 3rd of December.
Posted by Peter at 9:28 AM