The findings focus on strengthening international peace and security institutions, including recommendations for the UN. It does not focus as much on disarmament. 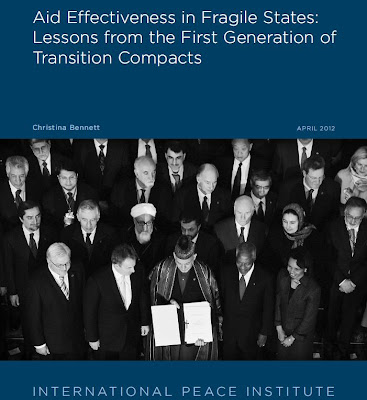 The report finds that ‘compacts’ will be more effective if the following recommendations are met:

Aid Effectiveness in Fragile States: Lessons from the First Generation of Transition Compacts

“Amid growing recognition that international efforts to support fragile and conflict-affected states are falling short of expectations, donors and partner governments continue to seek new approaches. Attention has recently focused on the notion of “compacts”—instruments that allow national and international partners to agree on the most urgent priorities requiring a collective effort in support of postconflict peacebuilding in a particular country, and identify how, and from which sources and instruments, implementation will be financed.”

There is a section on Afghanistan that looks at 2006 and the immediate post-Bonn realities. Here is the conclusion.


“The Afghanistan Compact was a good idea that fell short in implementation. At first, the intensity of the negotiations and personal commitment of its drafters fostered a true sense of trust among Afghan and international partners. In that sense, the document was effective as a high-level political statement of common purpose.

However, the lack of specificity, priority, and sequencing in its benchmarks and the unwieldy membership and weak authority of the JCMB made the compact difficult to manage and implement. In the words of one of its critics, “it was dead before it had a chance to live.”

Finally, the compact came too late to influence donor behavior or practices, as it was enacted long after donor policies had been set. Since 2002, aid had been focused in the east and the south, and other areas of strategic and military priority and deployment; and such policies continued despite evidence that they were undermining overall progress on reconstruction and development. Rather than refocusing donor investment, the compact and the JCMB became beholden to the existing priorities of individual nations.” 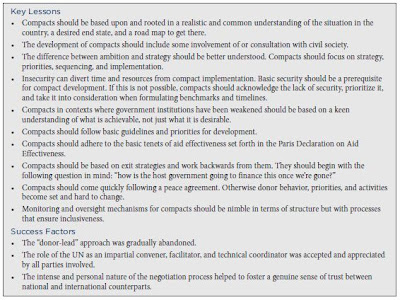