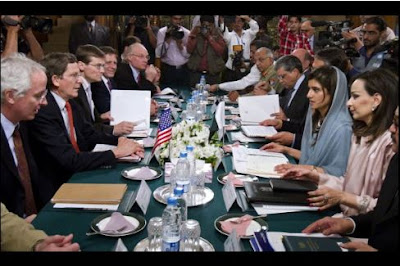 
Marc Grossman is in Pakistan for the first time since US forces killed 24 Pakistani soldiers in a cross border attack last November. The US has been unwilling to suspend drone attacks into Pakistan, one of the key demands before ground transit of NATO and US war supplies to Afghanistan can resume.

AP reports on the meeting yesterday.


“He said he didn't expect to get an immediate commitment that the routes would reopen but that "the task now is to begin a conversation about how to move forward." Grossman also repeated earlier U.S. statements of regret but didn't apologize.

Washington wants the supply routes open before a May 20-21 summit of NATO leaders in Chicago.”

Here is a review of the Pakistani demands.


"After weeks of debate, the Parliament of Pakistan has unanimously endorsed a list of demands to guide discussions with the United States.

If these demands are met, the US/NATO supply lines – for food and fuel – would be opened. The demands are non-binding and must be approved by senior US and Pakistani officials.”