The Right to Protest | Graphic Images From the NYT’s

As we get ready for the NATO summit next month in Chicago and the conventions this summer these images are reminders of the challenges we face. Click on the image to expand. 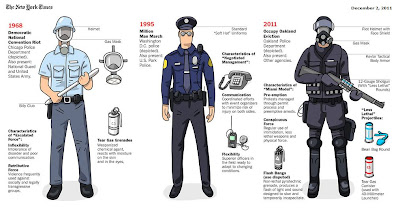 "Just as the styles of protest have changed from one generation to the next, so have the styles of protest policing. Technological advances, training innovations and changing attitudes toward the right to assemble have all shaped the way the police handle the challenges of large demonstrations. During the 1960s and ’70s, police officers treated many protests as a threat to the social order and responded with brute force. In the 1980s and ’90s, demonstrations tended to be less confrontational and the police responded with more accommodating tactics." 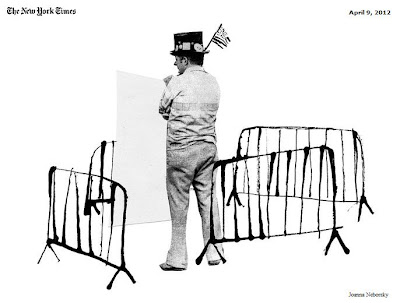 "EVERY four years, we witness the spectacle of the presidential nominating conventions. And every four years, host cities, party leaders and police officials devise ever more creative ways of distancing protesters from the politicians, delegates and journalists attending these stage-managed affairs."

Additional Resource: When Police go military
Posted by Peter at 11:24 AM