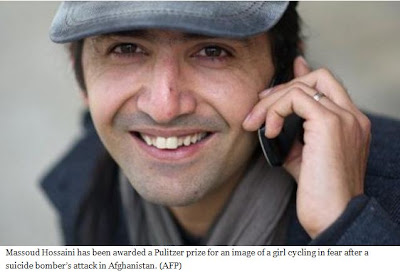 A nice profile of Massoud Hossaini by Abubakar Siddique. Massoud was award the 2012 Pulitzer Prize for breaking-news photography on Monday. You can find a slideshow of his others images at the bottom of the page.

He recalls the day he took the award-winning image vividly. It was December 6, 2011, on the occasion of the Shi'ite festival of Ashura. 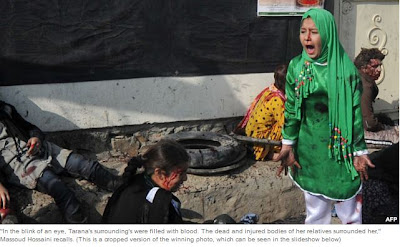 Tarana stands erect amid the dead and injured at her feet, her blood-stained hands opened as if asking, "Why?" Tears and blood stream down her face, her mouth agape.

It is a heartbreaking image, one that captures the ubiquitous violence that has befallen Afghanistan, and for that it has been awarded the 2012 Pulitzer Prize for breaking-news photography.

But for the man who took the picture, the photo that has earned him international recognition leaves him conflicted, a reminder of the traumatic experiences he encounters as a news photographer in one of the world's most violent places.

Afghan photographer Massoud Hossaini recalls the day he took the award-winning image vividly. It was December 6, 2011, on the occasion of the Shi'ite festival of Ashura.

As participants of a festival procession gathered outside the Abul Fazel Shrine in Kabul, a powerful blast went off. Standing just 15 meters away from the blast, Hossaini was spared major injury by the hundreds of mourners between him and the suicide bomber.

Hossaini rushed toward the center of the blast, which killed more than 70 people and injured scores more. There, as the smoke cleared, he saw the 10-year-old Tarana, dressed in green, screaming amid the chaos.

"In the blink of an eye, Tarana's surrounding's were filled with blood. The dead and injured bodies of her relatives surrounded her," Hossaini says. "Among them were her brother and playmates. This caused her to go into shock, which led her to stand in the mayhem and cry in pain."

Showing Afghans' Pain To The World

Despite his own shock and shrapnel injuries to his arm, Hossaini continued to shoot pictures. When he was done, he rushed back to his office at Agence France-Presse to upload the images for the world to see.

"The procession was drenched in blood, but I was still responsible for covering it. This sense of responsibility motivated me to continue taking pictures," he says. "So I covered that tragedy from many angles so that people around the world could see what pain I saw that day and what pain we observe almost every day in similar incidents."

Afterward, Hossaini sought treatment for his wounds and retreated home to his family. He soon began receiving telephone calls -- his photograph of Tarana had appeared on the front pages of major U.S. newspapers, including "The New York Times", "The Washington Post," and the "Los Angeles Times."

"To me the picture showed to the people of the world what had happened in Kabul that day. What had struck Tarana and what had I witnessed," he says.

Proud, Despite The Suffering

It was a point of pride for the 30-year-old photographer, who after fleeing to Iran to escape the Soviet occupation in Afghanistan had worked as a tailor to raise money to buy his first camera.

He documented subjects close to him -- the reformist movement in Tehran and fellow refugees living along Iran's border with Afghanistan.

Hossaini returned to his native Kabul after the fall of the Taliban in 2001. There he took various photojournalism courses and joined Agence France-Presse in 2007.

This year, his hard work was awarded, multiple times. He is currently in Holland to receive second prize in the Spot News category for the 2012 World Press Photo contest, which was awarded for his photo of Tarana. Next, he will head to New York to pick up his Pulitzer, and a $10,000 prize.

While Hossaini expresses satisfaction with his awards, they have also left him with conflicting emotions.

"I am happy that, as an Afghan, I am able to reflect the suffering of Afghans. But I am unhappy over what happened and that I witnessed it," Hossaini says.

"I saw Tarana in that condition and I am even in contact with her now. I know that she has nightmares about it just as I do."