What Does the New Agreement on Night Raids Mean? 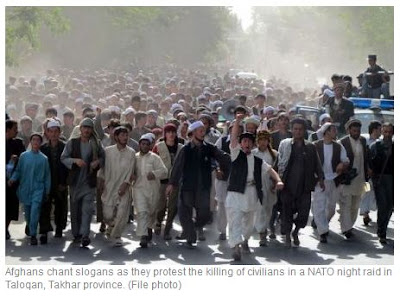 The new agreement signed over the weekend between the US and Afghanistan establishes guidelines for the continuation of night raids by Special Forces. Follow the link for the full text.

The agreement sets out a new chain of command for ordering and conducting special operations. They must first be approved by a new all-Afghan body called the Afghan Operational Coordination Group (OCG), and then conducted by Afghan Forces, with support from US Forces in accordance with Afghan laws.

The US will continue to play a vital role.

Kate Clark with Afghanistan Analysts Network has the details. She focuses on the Afghan gains in control over night raids noting that it will put the government more at the forefront of the anti-Taliban struggle politically and militarily.

The embrace of this controversial program – and the associated targeted killings - is no victory for those calling for alternatives to violence. It does however offer hope that Afghans can hold their government responsible and accountable for future actions. It has proven impossible in the past to hold the international forces accountable for actions they see as part of war.

At the same time, she cautions that the agreement allows Afghan Special Forces to arrest people who can then be held without trial. The text of the agreement is included.

“The Afghan government is delighted with the MoU, rightly seeing it as a huge gain for Afghan sovereignty. President Karzai is now, at least nominally, in charge of one of the most politically and militarily significant and controversial aspects of the war and will probably continue to insist that US forces take a back seat. How far the Afghan government actually achieves sovereignty however remains to be seen: one can imagine ‘US support’, for example, meaning US forces and advisors remaining in de facto command, with Afghan colleagues being deferential to their wishes and expertise. However, the MoU does give Afghans the means to actually take some sort of command and control.

Along with security prisoners (which was the subject of an MoU which was signed last month), the contentious issue of night raids has been a major stumbling block to getting a strategic partnership deal between the two countries. To secure this MoU, the US has conceded a great deal, while Karzai has gained ground.

At the same time, from the international side, the agreement may help address the enduring complaint of the US and its allies that the president does not sufficiently ‘own’ the war: that he criticises his allies and international forces while occasionally speaking sympathetically about the Taleban, as if he sat above and outside the conflict. In the future, if civilians are killed in raids, or there is alleged theft of valuables or if homeowners feel dishonoured by fellow Afghans or their invited US allies, barging into their houses, it will now be his responsibility. He will no longer be able to behave as if this is a conflict he has no part in.”

Tags: Night Raids
Posted by Peter at 7:31 AM