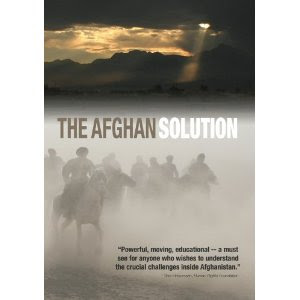 This beautifully shot video takes us not only into the streets of Kabul but into rural Afghanistan where the thorniest issues exist and most of the fighting takes place.

With a reliance on Afghan voices, the fundamental political issues are exposed and explored;

– the failure of the Bonn gathering to invite all parties to the negotiations on Afghanistan’s future;

– the ill-conceived strategy to create a strong centralized government; and

– the fact that many Afghans have not benefited from the foreign aid that has been spent in the country.

It’s a living political history and expose on the powerbrokers. Insights from traditional – and new – structures of power highlight the challenges Afghans face, and offer solutions.

It includes a concise history of the US role in arming the Mujahedeen to fight the Soviet Union in the 1980’s, the subsequent support for those same groups in the overthrow of the Taliban government in 2001, and the current deployment of 150,000 foreign troops in the country.

I would recommend this film for community screenings and discussion.

Here is another formal review.

“The opening line of the film, describing Afghanistan as a “country at war with its future,” encapsulates the thesis of this outstanding work. The film gives a full assessment of the lurking but distinct threat that the Taliban currently presents in Afghanistan, as well as an assessment of the interventions of the United States.

Interviewed members of Parliament call for more reconstructive projects, such as building roads and digging wells, and warn of the consequences of an abrupt withdrawal, as the Soviets did in 1989. Otherwise, Afghanistan will devolve into a hub of international terrorism. The people of Afghanistan are quick to cite that the lack of United States initiatives in areas that are not combating the Taliban.”

Go here to see a clip and visit the project home page.