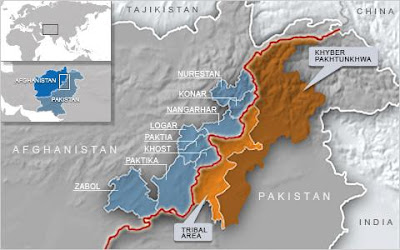 “As many as 12,000 Afghan civilians have fled villages along the border with Pakistan since mid-June, seeking refuge from frequent artillery barrages fired by Pakistani security forces, displaced families and the United Nations say.

"Afghans are fleeing village by village," said Ilija Todorovic, head of the U.N. High Commissioner for Refugees office that covers the mountainous Afghan border provinces of Kunar and Nangarhar targeted by Pakistani fire. "The shelling started in January, picked up in the spring and intensified in June with entire towns destroyed."

The most recent surge in the shelling, which is causing a crisis in relations between Kabul and Islamabad, occurred as the U.S. steps up pressure on Pakistan to clamp down on militants following the killing of Osama bin Laden in May. While Pakistan's security establishment tolerates and even assists Afghan insurgents, the Pakistani army is fighting a separate Pakistani Taliban insurgency in tribal areas along the border.”

In yesterday’s Washington Post, Karen DeYoung comments on the announcement of the US withholding $800 million in military aid to Pakistan.

“The Obama administration has delayed payment of hundreds of millions of dollars in promised military aid and reimbursement to Pakistan to reflect its displeasure with that country’s lagging security cooperation, according to U.S. and Pakistani officials.

The decision to withhold the aid follows Pakistan’s cancellation of visas for more than 100 U.S. Special Operations trainers working with that country’s Frontier Corps, along with its refusal to issue visas for equipment technicians, after long-escalating bilateral tensions culminated in the cross-border U.S. raid in May that killed Osama bin Laden.

Pakistan’s actions “have given us reason to pause,” White House Chief of Staff William M. Daley said Sunday on ABC’s “This Week.” “Until we get through these difficulties, we’ll hold back some of the money that the American taxpayers have committed to give.””