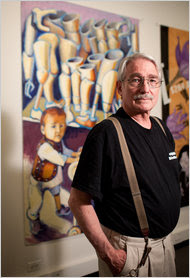 The Windows and Mirrors exhibit opens this evening in Chicago. There are three weeks of activities planned with next stops in Atlanta and San Francisco.

John Pitman Weber remembers the 1960s and ’70s in Chicago, when scores of artists would join mammoth marches protesting the Vietnam War and antiwar murals were a common sight on city streets.

Today, public art is much more “domesticated and institutionalized,” said Mr. Weber, the co-founder of the Chicago Public Art Group and one of the city’s best-known muralists. But Mr. Weber hopes a traveling exhibit of murals about civilian casualties in Afghanistan will evoke a past era when murals made bold political statements and spurred frank discussion about foreign policy.

The exhibit, “Windows and Mirrors,” runs through July 23 at the ARC Gallery, 832 West Superior Street.

Mr. Weber helped the American Friends Service Committee, a Quaker peace group, get the project going last summer, signing up noted muralists from around the country, including himself and seven other Chicagoans.

The 32 murals on exhibit here, which are painted on large panels of parachute fabric rather than walls, are graphic and disturbing: images of women wailing in despair; children playing amid explosions; corpses in an abstract, colorful array that Mr. Weber likens to “a cave painting.”

According to the United Nations, May was the deadliest month for Afghan civilians since it began keeping track in 2007, with at least 368 killed. Human rights groups say the true civilian toll may be significantly higher because many people die of disease, cold or hunger after being displaced from their homes by fighting.

The two murals by Lillian Moats, a Chicagoan, explore the impact of unmanned drones on civilians. One shows people fleeing a drone that casts a blood-red shadow. Another features a woman at a window, unaware that she is framed in digital cross hairs on the computer screen of a remote operator.

Mr. Weber’s piece, based on a news photograph, depicts a young boy learning to walk with a prosthetic leg, below a hodgepodge of low-tech artificial arms and legs jumbled on a shelf.

The prevalence of amputees is also depicted in drawings by Afghan children displayed alongside the murals. Zaher Wahab, an artist who splits his time between the United States and Kabul, Afghanistan, asked the children to draw situations representative of their daily lives. They drew pictures of children with amputations, a bleeding pigeon and a frowning sun.

The exhibit made its debut in Philadelphia in October and is touring cities across the country. At each stop, artists are working with local schools to create pieces. In Chicago, they have been at Josephine Locke Elementary School and Sullivan, Thomas Kelly and Orr Academy high schools.

Mary Zerkel, the American Friends Service Committee’s national coordinator of “Windows and Mirrors” and a Chicagoan, said she hoped the exhibit would remind people to contemplate the effects of a war that seems endless, even as President Obama last week announced a troop withdrawal in coming months.

“It’s been almost 10 years — my daughter’s entire life — this war has been going on,” Ms. Zerkel said. “People talk about ‘Afghanistan fatigue.’ They’re tired of thinking about it. We hope this makes people talk and remember.”

Here is a link to the article.