Afghanistan: Shining a Light on the Dark 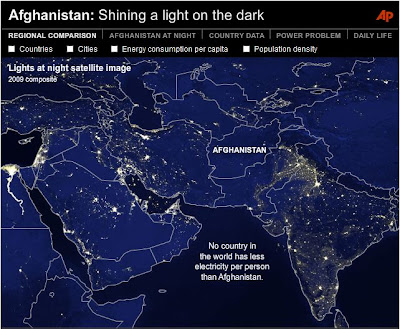 More than $1.6 billion from the US and at least 14 other countries has been spent on energy projects since 2002

This interactive study by the Associated Press has graphics and video that explains what went wrong.

Although the northern Afghan city of Mazar-e Sharif enjoys a measure of stability and a conveniently-located source of electricity, residents say they are only getting a couple of hours of power a day.

Apart from making life more difficult in the summer heat, the power outages have led to fears of infection due to problems with keeping foodstuffs cool.

Residents are angered that the massive amounts of aid money injected into Afghanistan has failed to improve electricity supplies, a basic building-block of economic development.

People in Mazar-e Sharif get between one and three hours of electricity every 24 hours. IWPR interviewed one man, Fereidun, who said he had an hour a day, but with a current so weak that it would not run his refrigerator.

“You see, I can’t bear this hot weather even though I’m an adult. How can children bear it?” Fereidun said, fanning himself as he sat under a tree in front of his house. “I use this fan on my children all night. Sometimes I even pass out. If there was electricity, I wouldn’t have these problems, as I own [an electric] fan and a refrigerator.”

Fereidun placed the blame squarely on local government, saying, “For God’s sake, every government official in the province has been working for the last ten years as if he inherited his post. If they can’t work, others must replace them.”