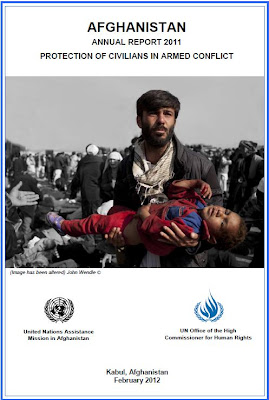 Civilian deaths from the war have increased for the fifth year in a row. The record loss of the life for men, women and children creates anger, fear and resentment at all parties.

The foreign occupying armies whose very presence and kill/capture policies have escalated fighting, the anti-government forces who are increasingly killing people, and the dramatic increase in deaths attributed to the Afghan National Security Forces.

The vast majority of Afghans want the violence from all parties to end. There is more background information on previous UNAMA reports at the bottom of this message.

Kate Clark writing for the Afghanistan Analysts Network has a good summary. The title of her essay is ‘Talks have not stopped killing of Afghan Civilians.'

“Reading UNAMA’s latest annual report on the protection of civilians is difficult – a bludgeoning of the brain with statistics of death, injury and bereavement. It is an indication that whatever assertions might be made of progress in the war, Afghan civilians are dying in increasing numbers. It reinforces the urgency – as peace talks may now be on the agenda - of the war itself needing to be ended. And as UNAMA itself says: ‘[A]ny such negotiations [should] place the highest priority on protection of civilians in the ongoing armed conflict and in any outcome that leads to its resolution with an emphasis on concrete and effective measures to reduce civilian deaths and injuries.’

‘Anti-government elements’ continue to kill the vast majority of civilians. UNAMA puts this figure at 77 per cent:”

“Deaths by ‘pro-Government elements’ which include international and Afghan government forces are down by four per cent, although there has been a marked increase in deaths from aerial attacks and a 196 per cent increase in deaths by Afghan National Security Forces (ANSF). Geographically, the impact of the war has got less, although it is still bad in the south, and it has got a lot worse in the south east and east.”