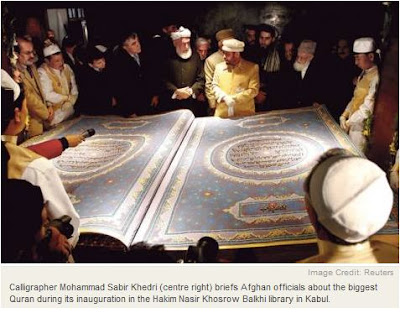 Image above from January 2012 ceremony.

"An Afghan calligrapher has worked for five years to create the world's biggest Quran, a bid to show the world that Afghanistan's rich cultural heritage and traditions have been damaged but not destroyed by 30 years of war."

AP reports that seven people have been killed in protests over Quran burning at the Bagram Air Base.

“Afghan President Hamid Karzai appealed for calm Wednesday after clashes in several cities between Afghan security forces and protesters furious over the burning of Muslim holy books at a U.S. military base left seven people dead.

The anger over the Quran burning has sparked two days of protests across Afghanistan and tapped into anti-foreign sentiment fueled by a popular perception that U.S. and Western troops disrespect Afghan culture and Islam. The demonstrations prompted the U.S. to lock down its embassy and bar its staff from traveling.”

The WSJ points out:

“The clashes highlighted mounting anti-Western resentment in Afghanistan as top American officials tried to contain the damage by personally apologizing to Afghan President Hamid Karzai at his Kabul palace.

Such contrition failed to dampen the anger as Afghans reacted to reports that coalition soldiers at Bagram Air Field Monday night tried to incinerate a truckload of Islamic religious items, including copies of the Quran, Islam's holiest book. U.S. military officials have launched an investigation to try to determine why the soldiers were directed to destroy Islamic books from the detention center's library that were said to have contained "extremist literature" and "clandestine communications" shared among detainees."

The religious items being destroyed were from the US- Run military detention center library in Parwan.

There once was a plan to turn over the main U.S. detention center in Afghanistan to control of the Afghans in 2011. That’s out the window. Instead, the military is offering millions to vastly expand the center’s inmate intake.

Specifically, $35 million will fund expansions necessary to house “approximately 2,000 detainees” at the Detention Facility at Parwan on the outskirts of Bagram Air Field, an hour’s drive from Kabul. The Army Corps of Engineers wants to expand “detainee housing, guard towers, administrative facility and Vehicle/Personnel Access Control Gates, security surveillance and restricted access systems,” according to a recent solicitation. A Turkey-based company received the contract in late January.

This wasn’t supposed to happen. As far back as summer 2010, senior military officials in charge of the detention center boasted to Danger Room outright that by January 2012, they wouldn’t be running the square-mile sized prison. They considered handing the detention center to the Afghans a mark of their own success at fostering a culture of law and order within the Afghan government.

Alas. A year later, the command in charge of the detention center, Joint Task Force-435, admitted that it wouldn’t complete the handoff until the U.S. ended combat in 2014. The reason? “The Afghans don’t have the legal framework or the capacity to deal with violence being inflicted on the country by the insurgency,” an official told the Financial Times.

But the expansion is only going to increase the caseload the Afghans will eventually deal with. This is no minor refurbishment. The Detention Facility at Parwan held 1,000 inmates in August 2010. The $35 million expansion will prepare it to double the detainee population.

That should underscore the amount of fighting still to come in Afghanistan ahead of 2012. Even though much of the U.S. military views Afghanistan as a war with an expiration date — as I learned during a brief trip to Fort Leavenworth, Kan. yesterday, where soldiers referred to the war in the past tense — there will still be 68,000 troops there by summer’s end, and it’s not clear how many troops will leave Afghanistan by 2014.

Nor will 2014 mark the end of the war. The U.S. wants a residual military presence in Afghanistan, keeping troops on bases run by Afghans, as an insurance policy against the country falling apart and to stage the shadow war in Pakistan. The war will become heavy on Special Operations Forces in lieu of conventional troops — and human rights workers allege that the commandos run an unacknowledged torture facility at Parwan.

Even if they don’t, there are few who believe the Afghanistan War is on the cusp of ending, even if the U.S. will — slowly, incompletely — cease waging it. Where there’s war, there’s wartime detentions. And Parwan isn’t the only detention center on the grow: the U.S. is spending up to $100 million building jails across Afghanistan.
Posted by Peter at 12:19 PM