SIGAR Report on Relief and Reconstruction 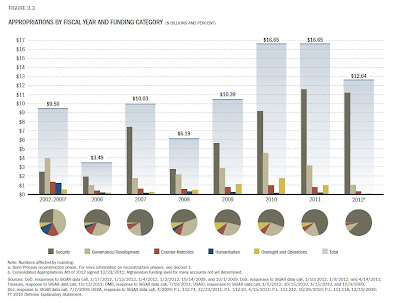 On Monday the Special Inspector General for Afghanistan Reconstruction released the final report for 2011. These reports are mandated by law and must be delivered to Congress each quarter. The report covers the time period that marked 10 years since the US assault in October of 2001 and carries the tag line '10 years of reconstruction 2001-2011'.

Of particular interest is the fact that 61% of the money articulated for relief and reconstruction is actually spent on funding, arming and training government forces, private militias, and undercover units that operate along the border with Pakistan.

The report confirms that 98,933 U.S. forces remained in the country at year’s end.

Nevertheless, these are authoritative figures on what the US is actually spending resources on in Afghanistan. You can see from the chart above that all assistance for humanitarian relief will be eliminated in 2012.

The chart graphically shows the growing dependance on exclusive military priorities over the years.

For this year 88% will be military.

I added the percentages in brackets for the text below lifted from the report.

As of December 31, 2011, the United States had appropriated nearly $85.54 billion for relief and reconstruction in Afghanistan since FY 2002. This total has been approximately allocated as follows: