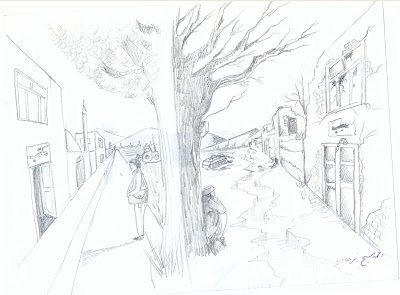 The drawing is from a project with Afghan students who were asked to create images of what their lives are like.


"The BBC and The Times have obtained a classified NATO assessment of the Taleban. The leaked report, which has made headline news, has informed us that NATO thinks Pakistan is supporting the Taleban, that the Taleban are defiant and enjoy widespread support, that Afghans frequently prefer them to their corrupt government and that Afghan government officials have secretly reached out to insurgents locally.

The presence and actions of international forces as a driver of the insurgency apparently did not come up in the detainee interrogations which form the basis for the assessment. That all this should be news only exposes the wishful thinking which lie at the heart of the international mission in Afghanistan, says AAN senior analyst, Kate Clark."

According to The Times, the State of the Taleban report was put together by the US military at Bagram air base in Afghanistan for top NATO officers last month. President Karzai also demanded last month that the prison be turned over to Afghan control.

“What the report appears to be silent on is the other huge factor driving the war, the ten year foreign occupation – as many Afghans, whether they welcome international forces or not, call it. Night raids, killing civilians, detentions - even when all three of these actions may be legal and/or militarily necessary - upset people. Then there was the torture, mainly by US forces, in the first couple of years and the support the international military gives to abusive Afghan actors. Curiously, there is no mention of this - did the detainees not mention the foreigners?”

“One of the major problems of the post-2001 settlement has been the narratives told about and to Afghans and to the voters back home which were never really anchored in reality. There has been a frequent gap between talk and belief and between talk and action. Praise for the Afghan army and police in public, while in private, there is criticism and worry. Promises of democracy and then white-washing of fraudulent ballots. Assurances that human rights will be protected and then an endorsement of impunity for both war criminals and those currently abusing their power.

In Afghanistan, few are fooled and it leads many to wonder (a question I have been asked on many occasions) whether the foreigners are stupid or complicit. Back home, voters have also become increasingly bewildered as news of corruption and abuses have filtered back even as the same story is peddled by their governments: their brave soldiers fighting to defend a democratic, women-friendly state against the black-hearted, terrorist Taleban. Voters are convinced that Afghanistan – in its current incarnation - is not worth fighting or footing the bill for.

There is a chance that the leaking of this report might be an Emperor’s New Clothes moment when the international powers start speaking honestly – or at least not lying – about what they are doing in Afghanistan and what they actually hope to achieve. On the ground, their current narratives of success and progress are fooling very few. When there is such a deep gap between what is thought and what is said and policy is built on what one wishes were true, failure surely awaits.”

Additional analysis with NYT’s
Posted by Peter at 11:06 AM