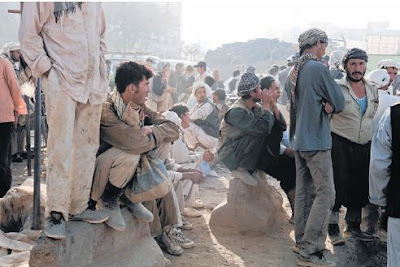 Photojournalist Guy Smallman has been to Afghanistan four times, working independently of the NATO media system. He is the only western journalist to have visited the scene of the Granai massacre in which 147 people, including 93 children, were killed by NATO bombing.

He returned from his latest trip in January and is touring with a photo exhibit. The work documents the everyday struggles faced by ordinary Afghans from the violence of war as well as poverty, drug abuse, and unemployment. Realities that are often ignored or obscured in mainstream media coverage.

He also has a short film called “Fifteen million Afghans”.

Here are more details about the speaking tour. It is organized by Quaker Peace and Social Witness and Peace News. Tomorrow they are at Friends House in London. He is joined by ex-soldier Benn Griffin.
Posted by Peter at 10:14 AM